Every place has a story. 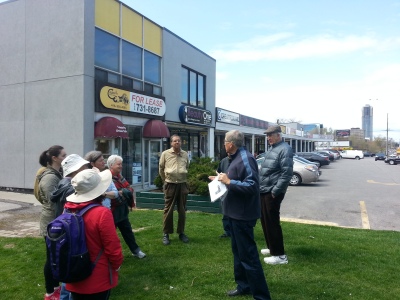 The grand story of Wishing Well, like many communities of Toronto, is contained in its historical evolution. Not surprisingly, the layer of suburbia is probably most central to this area. And that’s where my own fascination began.

The millionth house built after World War II in Canada is located in Wishing Well Acres — a little white corner bungalow originally purchased for $16,200. Of course, this bungalow could have been built anywhere — that is to say, there was nothing really special about Wishing Well that ‘bred’ the millionth house (other than perhaps the timing of the subdivision’s construction in 1956).

The genesis of Wandering Wishing Well Acres came from the discovery of Canada’s Millionth Post-War on an Interactive Heritage Property Registry Map. Source: City of Toronto.

But the fact that the millionth house was here gives a bit of insight about the area in the 1950s — why people were moving to Toronto’s new suburbs. The owners of the watershed home were Mr. and Mrs Camisso and their two daughters (nuclear family, much?). The story goes that they were not even looking for a home but Mrs. Camisso was attracted to the green roof. Other selling points: its proximity to the Toronto ByPass (now the 401) and its automatic heating (no more shovelling coal into furnace!).

1956 is a funny year. In the grand timeline of history, it really isn’t that long ago. But at the same time, it is hard to find a reference point to that period. Newspapers help; first-hand accounts are better. My goal for the walk was to retell the ‘History’ of the area (via research), and elicit other ‘histories’ (i.e. personal anecdotes) from fellow walkers. Together, those make up a complete picture. I think that was achieved.

Wandering Wishing Well Acres had the wonderful benefit of two original residents and their takes on the neighbourhood some fifty and sixty years ago – one that still lives in the subdivision and one that returned for the first time in decades for the Jane’s Walk! Some of those insights: neighbours really did all know each other, children rode their bikes together, and people would gather in Wishing Well Park’s flooded ice pond. It was a great place to grow up. I get a similar vibe whenever I walk through it today.

Back to the layers: It’s no secret Scarborough was mostly rural fields prior to WWII. The farms are gone, but their geographic legacies remain. Subdivisions were developed 100 acres at a time — the size of patented farm lots that were gradually swooped up in the 1800s. Sheppard Avenue, the main street of sorts, provided access to the three farms that compose Wishing Well Acres as Concession Road III. It was later made a highway between Pickering and Yonge Street (because apparently Kingston Road was too congested in 1931?).

There’s the enduring power of names in local storytelling, too: Wishing Well was the name of Christopher Thompson’s farm; Vradenburg/Vradenberg, of which the street and school is named, was another pioneering family (albeit, with a more European spelling: Vradenburgh). 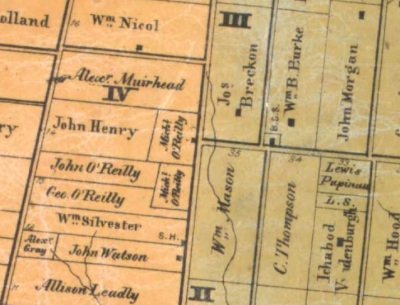 Of course, there’s a story before the Vradenburghs, Thompsons, and Masons. Was there Aboriginal presence here? Unfortunately, there’s no proof, but I’d still say possibly. Other sites in Scarborough — the Alexandra Site, Tabor Hill & Birkdale Ravine — point to indigenous settlement as late as around 800 years ago. Those areas all had a waterway in common — and Wishing Well once sported a free-flowing creek through it.

So then, what’s the future of Wishing Well Acres? I’d say it’s similar to its past: redevelopment. Sheppard Avenue is changing to accommodate more density: walkable, mixed use and mid-rise buildings. It’s like a retrofit to the blantantly, car-designed suburb. Of most interest to Wishing Well is the proposed development at Pharmacy and Sheppard. If it gets the green light, it would replace Wishing Well Plaza, which was at one time the commercial nexus of the early community and today home to a few eateries and shops that are largely and perhaps erroneously overlooked.

And what would a talk of the future be without public transit? Regardless of what transit on Sheppard Avenue ends up looking (or if it ends up looking like anything!), demand for (improved) public transit isn’t new! In 1956, the Town and Country Ratepayers and Community Association were calling for more than just a rush hour bus on Victoria Park. They wanted service on Sheppard! Plus ca change, eh? (That bus didn’t come until the mid-1960s, by the way.)

There are other aspects to the story  too: the burying of Taylor-Massey Creek, the gem of Wishing Well Woods (another rural remnant), the lost O’Sullivan’s Corners village at Victoria Park and Sheppard (of which the Johnny’s Hamburgers building is a leftover), and the Northwest Drive-in once located in Consumers Business Park (which is also getting a makeover.) It’s fitting that “Wandering Wishing Well Acres” ran overtime — there was too much to say!

Being located in Scarborough, the Wandering Wishing Well Acres Jane’s Walk was likely not destined for popularity. It’s admittedly not a “sexy” topic nor located in a “sexy” area. But I tried not to let that deter me.

Wishing Well Acres has a story. It’s a good one. And it should be told and celebrated.