Scenes From The Peanut, Parkway Forest, and Graydon Hall

When I was first told about a place in Toronto called the Peanut, I laughed. The Peanut? What kind of name is that? I was then explained that it really looks like a peanut. 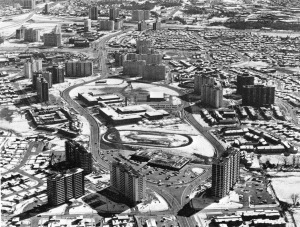 But even after being told that and looking it up on a map, I still had no visual conception of it. Don Mills and Sheppard itself isn’t completely unfamiliar to me – I’ve known it since my childhood as the home of Fairview Mall. My family doctor is also located here. But Don Mills heading north toward Finch – no clue. 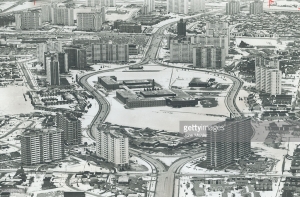 And thus, I begin at the top. Van Horne Avenue. To the north, the street consists of lanes of north-south traffic. To the south, the street splits off into singular direction-flowing lanes on either side of a giant curving island.

It’s not an original thought to suggest The Peanut isn’t very pedestrian friendly – even now, getting to its centre is unusual. A Walkability Study by Paul M. Hess and Jane Farrow goes into great detail about the issues – good and bad – about living and walking the Peanut. But even without defined criteria, one can see with one’s own eyes – and feet – how awkward traversing the Peanut can be. Walking toward the mall, I can already see someone jaywalking the southbound curve. 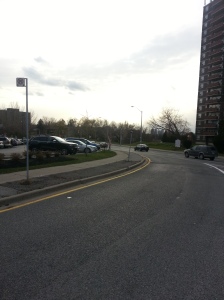 Peanut Plaza displays no obvious charm, but seems to hold a bit of meaning to the people that know it. Aesthetically, it’s clearly of another era: the mid-1960s, much like the rest of its surroundings. (The skylight inside, though, is commendable.) 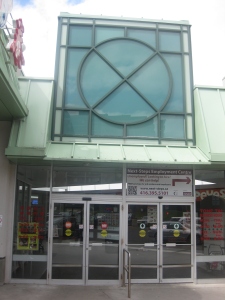 It’s notably anchored by Tone Tai Supermarket, but every bit of positive word of mouth I’ve heard about the Plaza lies in its eateries – specifically Allan’s Bakery and Mr. Jerk, which have been described to me as having the best Jamaican patties and food in the city. Imagine that: such an unsung landmark in suburbia with some of the best food in Toronto. 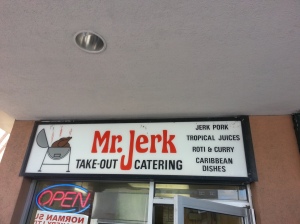 The rest of the Peanut houses Georges Vanier Secondary School and Woodbine Junior High School. The latter is notable to me (and perhaps only to me) for its naming. Woodbine Avenue currently exists as two main stretches – one running south of the River Don and one running north of Steeles. The portion in Markham once extended south to the 401 and beyond. It was replaced by Highway 404 in 1976. 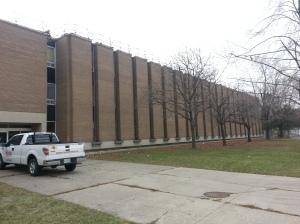 Aerial of The Peanut & Parkway Forest, 1966. Woodbine Avenue and the Don Valley Parkway on the right. Source: City of Toronto Archives.

Created in 1963, The Peanut is the embodiment of post-war suburbia in Toronto: car designed streets, apartment buildings, strip malls, and minimalist looking schools.

I don’t venture into the residential streets, but in his exploration of the Peanut and the larger Don Valley Village, The Toronto Neighbourhood Walks Project‘s Jason points out the side streets add a new twist to the cookie cutter subdivision. Instead of the same house repeated over and over, it’s the same four in a row, creating a false sense of diversity. (As the comments point out, though, even the residents know this and are trying to instill some individuality to their homesteads.)

Don Mills West and East converge at Fairview Mall Drive, which houses Fairview Library and Theatre. For the longest time, I knew it as a great library branch – and an architectural slab of grey concrete. In 2013, a glass addition was added to its 1972 exterior. Only months after reopening, though, a flood shut down the library again.

Across the parking lot is Fairview Mall. It was opened here atop farmland in 1970. Its anchors at the time were Simpson’s and The Bay. I think it might be the only major Toronto shopping centre that never had an Eaton’s.

It has grown a bit since my childhood; the tenants are different, the food court’s moved, and there’s no more Rainbow Cinemas and their cheap matinee movies. Even the parking lot is different. There are now fences separating the mall from the library and medical building lots.

Walking south to Sheppard Avenue, you have to be a mindful pedestrian. There are cars turning in and out of the mall as well as buses turning into the station. 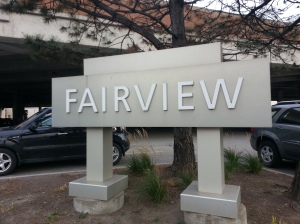 There is a neat find in a plaque devoted to Northern Dancer, a revolutionary thorough-bred horse ‘foaled’ (word of the day?) in 1961 at businessman E.P. Taylor’s Windfields Estate fronting Bayview Avenue. I question the very liberal use of ‘near this site’ (although the farm might have extended towards Don Mills), but it’s another unexpected tidbit of North York’s rural past. 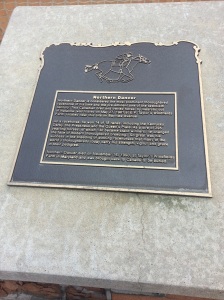 At the busy intersection of Don Mills and Sheppard, a look to the west produces the far off towers of downtown North York. 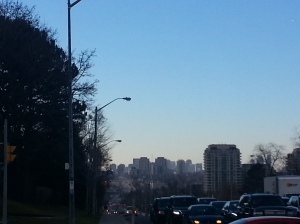 At the southeast corner, rainbow cones animate a nice walkup to the Emerald City condo complex. They are Douglas Coupland creations, and are the second occasion of his art showing up in Toronto suburbia – the first down the road at the Shops At Don Mills. 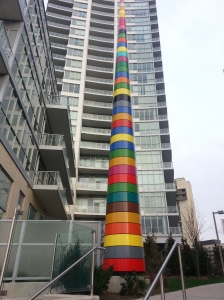 There’s also a Bell box covered in a jungled motif. I suppose that’s a reference to the ‘forest’ in Parkway Forest. The ‘parkway’ is naturally the Don Valley Parkway, completed here in 1966. Parkway Forest has its origins that year too, but after 40+ years was in need of revitalization and re-urbanization.

Don Valley Village is a bit of a misnomer, because I’ve been to actual Greek villages and there’s very little continuity between them and the ‘villages’ in Toronto. Emerald City – or, at least, its street layout – to me approaches that compact community feel. Coupland’s striped pencil crayons dot the streets, sprinkling new life into a space whose previous incarnation, according to the author and artist, was comparable to a World War I trench. Ouch. 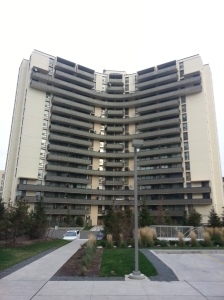 There’s an interesting dynamic within this community because there are the new towers of Emerald City and then the old Parkway Forest apartments. It’s got Toronto’s two tower booms in one place – the 1960s to 1970s and 1990s to now. 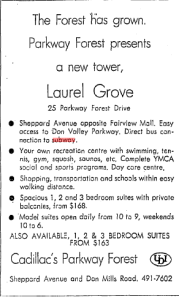 On George Henry Boulevard, there’s a pit awaiting the next phase of Emerald City.

Following Forest Manor Road down, one comes to Parkway Forest Community Centre, which looks every bit like a Diamond Schmitt creation: swanky, glassy, and energy efficient. 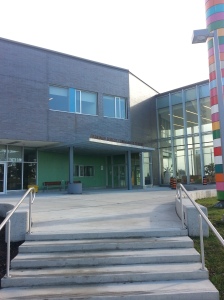 Leaving Parkway Forest, a venture south on Don Mills is a notable one. First, one can see the faint outlines of downtown Toronto and the CN Tower in the distance. Second, it treacherously (for me, anyways) runs over the 401, where the Peace Lady in White (I had no idea about her) has been known make her presence.

South of it, the community of Graydon Hall is named for the main landmark in the area, the Georgian-style Graydon House, which was constructed here in 1936. It was designed by Allan George and Walter Moorehouse for broker Henry Rupert Bain. 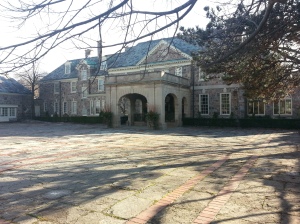 In Casa Loma-esque fashion, Graydon House is situated on a hill east of Don Mills Road, which makes for an amazing view of the gardens but also a slight feat to reach the manor.

Its historical driveway did not lead to and from Don Mills, however, but Woodbine Avenue. Until 1964, Don Mills stopped at York Mills and was continued north when new communities – The Peanut, Parkway Forest – necessitated its existence.

Aerial of Graydon Hall and area, 1963. Source: City of Toronto Archives. Graydon House is located in the top centre. Highway 401 is north of it. Woodbine Avenue on the right. Don Mills & York Mills, bottom left.

Henry Rupert Bain died in 1952, and his manor and estate was sold to developer Normco Limited in 1964, who constructed the surrounding high-rise and residential community. Today, the house functions as a wedding and event venue.

Around the corner from Graydon Manor is one of the first landmarks in the new community, George S. Henry Secondary School (now Academy). Built in 1965, it celebrates its 50th year in existence in 2015. I took Saturday language classes at G.S. Henry in my teens and haven’t been back since, so it was a treat seeing the school (and actually seeing what the rest of the area looks like). Its namesake, George Stewart Henry, was a farmer of the area and a former premier of Ontario. His former residence, Oriole Lodge, is situated west of Don Mills Road near the East Don.

To end things, I make my way through the residential community and down to Duncan Mill Road. I opt for another visit to the Duncan Mills Ruins, located at the Betty Sutherland Trail.

Two years after first looking into them, the industrial relics are still a mystery to me, but it seems they might be connected to the Graydon House story. Amongst their possible uses, Jason Ramsay-Brown of Toronto’s Ravines And Urban Forests speculates that they likely were a pumping station for Henry Rupert Bain’s estate. Neat! 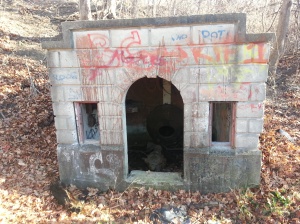 8 responses to “Scenes From The Peanut, Parkway Forest, and Graydon Hall”