Before I can start my stroll, I note the taste for coffee developing in my buds. I opt not for Starbucks and not for Timmies, which hang beside each other in competition, but for the Toronto Reference Library. Yes, it may be closed on this Easter Monday, but Balzac’s isn’t. The customer in front of me in line tries to pronounce the name of the brew she’s ordering; the barista has to correct her. Me, I don’t bother with the given name of my amber roast; I grab it and am on my way.  Now I can start. 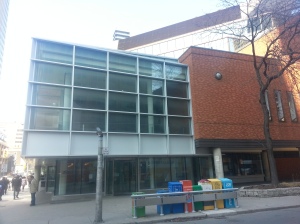 Yorkville is about as quintessential a Toronto neighbourhood as you can get. It also has a deeply layered past and an ever evolving future, some of which I am already aware of and eager to see the evidence of. While its borders have expanded and contracted over its long history, it’s my thought that the part east of Yonge doesn’t get a lot of consideration.

And so, that’s what I intend to do to start things off.

I don’t get very far on Asquith before I see my first discovery. Although I’m hugging (not literally) the Bell building on the opposite side of the street, my eyes spot a pathway beyond the library across the way. The street sign reads ‘Sherlock Holmes Walk’. Literary giants next to one another! Having read Mr. Conan Doyle’s biography years ago, I imagine he would approve of the tribute – he loved Toronto and Canada (and hated the States).

At the end of the way is Church Street, whose curvy route between Bloor and Yonge Streets is the result of a project to relieve traffic congestion in the 1920s. Even without this knowledge, the odd meeting of Church, Collier, and Park streets and the island it forms in the middle just looks unnatural. I look towards Davenport, spotting the famed Masonic Temple, 1917, but opt to head in the opposite direction.

My next stop, situated beside a singular Victorian house (no doubt once part of a row), is Asquith Green, which sadly is more muggy brown than green. Still though, I remind myself of the parkette’s potential in the summer and give it points for the animal cutouts and accenting structure in the middle. I don’t know the source of what I think is a quote, but subsequent Googling has produced ‘We Rise Again’, an Eastern Canadian music classic. Here’s a  moving version with the great Maritme songstresses, Anne Murray and the late Rita MacNeil.

Following Park Road up, I come to Rosedale Valley Road. This quiet throughway marks the border between Yorkville and its upscale residential sister, Rosedale.

It is also built on top of the now completely buried Castle Frank Brook. It is particularly important in shaping the modern geography of Yorkville, but also to its history – particularly in its brewing and brick making past. Located southwest of me near Sherbourne Street, for example, was Joseph Bloore’s brewery. Bloor Street, of course, is his namesake. (Mr. Bloore also holds the distinction of having the freakiest portrait of any figure in Toronto’s history.) Parkland marks the intersection, and trudge through it to arrive at Severn Street.

The tiny dead end street is anything but inconsequential. For one, it’s named after John Severn, another 19th century brewer. His establishment stood at Yonge and Church. Moreover, Castle Frank Brook’s alternate name is Severn/Brewery Creek. 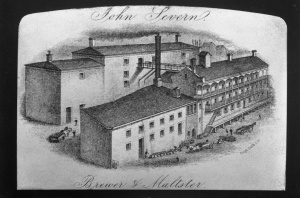 Perhaps even more notable to the street is that one can find the Studio Building. On the way here, I passed through Lawren Harris Park; Mr. Harris  lived and worked in the  Studio Building, 1914, along with other members of the Group of Seven.

The Studio Building holds double distinction as a National Historic Site and a Toronto heritage property. The Toronto Historical Board plaque in particular informs me that the Harris in Lawren Harris is of the Massey-Harris industrial empire. Learn something everyday. The Studio Building was designed to be a secluded quiet spot where artists can work their creative process. As I move around the building I hear the periodic screeching of the Yonge subway and somehow I think that doesn’t completely hold true today (although the surrounding parkland does help a bit).

I continue on my way, this time following Aylmer up. I stop for a moment to watch the trains roll in and out of Rosedale Station and then cross Yonge. The street becomes Belmont and I’m liking the streetscape on either side of me. Other than admiring the charm, however, I do have another purpose for being here.

Belmont House is a retirement home and long term care centre built in the 60s. More interesting to its story is that it is built on the site of an Aged Men’s Home, Aged Women’s Home, and Magdalen Asylum & Industrial House of Refuge.

The latter establishment is most fascinating. On first glance at the name, it doesn’t sound like a particularly good place – asylums generally don’t provoke the best connotations and the Biblical character it’s named for isn’t always portrayed in the best light either. The ever trustworthy Wikipedia tells that Magdalen Asylums are not just a Toronto thing. Its history, however, promotes it as a place of care for homeless women and I suppose I will take it as such. 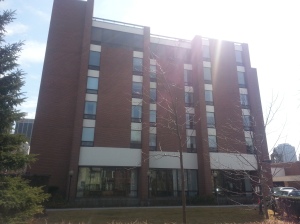 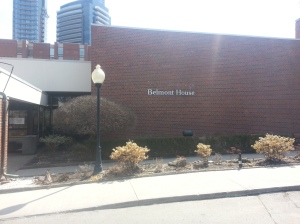 This detour completed, I circle back to Yonge Street and walk north. I turn onto Ramsden Park, the former site of 19th century brickyards. Castle Frank Brook ran through here too, the riverbed making for rich clay deposits. The park’s uneven, dug-in landscape is the only remnant of its industrial past. (And here I’ll shamelessly plug my Industrial Heritage Map). There’s also a few stubborn remnants of winter in a file snow piles that refuse to acknowledge the existence of spring.

Pears Street, which runs adjacent, is named for one of the brick makers. A cat lounges on the sidewalk and soaks up the sun. He has the right idea. I eventually hit Avenue Road. Across the way is 174 Avenue, otherwise known as the Village Corner in the 1960s Yorkville folk scene. The Village Corner gave the first break to Ian & Silvia and a young Gordon Lightfoot in 1962. For more on Gordon Lightfoot’s Toronto, look here please.

With a skip down the street and a turn onto Hazelton Avenue, I’m onto more familiar settings when it comes to the neighbourhood of Yorkville. Hazelton is considered part of the heart of the Village and is pretty much an architecture lover’s dream. Bay and Gable, Gothic, Worker’s Cottage…it’s hard not to dream while being here. Alas, I stop myself from getting too ‘in the clouds’.

The southern end of the street has a more commercial character. It features Heliconian Hall, the second National Historic Site of the day (and, like the Studio Building, also holds dual heritage recognition). The Hall is the counterpart to a place like the Arts & Letters Club on Elm Street in that it was originally a professional association for women when they were excluded from Arts & Letter Clubs. Today it is an event space.

Across the way are a line of boutiques and neat little street art. I lament at the sight of one characters wearing a Leaf jerseys. Somehow the ‘maybe next year’ saying isn’t appropriate. They are also the lead in to Hazelton Lanes, the premiere mall of the Village. 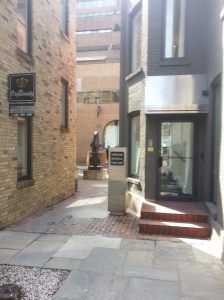 Yorkville Avenue marks the end of the street. At the corner is the Hazelton Hotel, which represents everything Yorkville is today – fashionable, luxurious, and expensive. The Hotel replaced a series of rowhouses after the heyday of the bohemian village, one of which housed the Riverboat Coffee House. This was the most famous of all coffee houses and another venue Mr. Lightfoot got his ‘chops.’

I follow the street east, passing the first Mount Sinai Hospital (1922) and the Sheriff’s House (1837) on either side of the street. I peek down Bellair and inwardly judge the patio-ers. I know it’s a sunny day and there’s a certain desperation for more welcoming climates, but it is still very chilly and not quite patio weather. Moving on, the wideness of Bay Street to me breaks apart the neat, quiet street vibe. It’s no wonder that, like Church Street, it didn’t always run through Yorkville. Bay was extended north to Davenport in 1922. 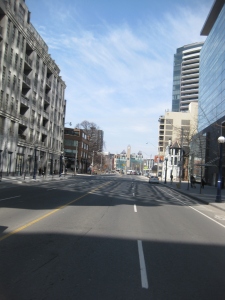 In any case, I cross it and pass the shiny and blue Four Seasons Hotel (which might be my favourite tall towers in the city) and its adjoining parkette. Beside is Fire Hall #10, 1890, which displays the Yorkville Coat of Arms. The emblem was once located a stone’s throw away at the now lost Yorkville Town Hall on Yonge Street. Decked on the coat of arms are symbols of early industrialists that built the Village, including our friend Severn the brewer.

Beside the fire station is Yorkville Library, 1907.  This Beaux-Arts gem is one of the famed Carnegie Libraries. Adjoined to it is Town Hall Square Park, which, and I know parks come in different forms and sizes, but isn’t too park-ish too me. Maybe users of the park, like the woman promenading around with her dog, disagree.

I leave the area and head down a laneway to Cumberland. Cumberland Terrace is to my left. It’s a bit of an oddity within its surroundings. It might have fit in well in 1970s when Yorkville was beginning its gentrification, but now it’s a bit of a tacky sour thumb.

Village of Yorkville Park (doesn’t really roll off the tongue, does it?) is a bit of an oddball park too. It’s meant to represent the diversity of Canadian landscapes from coast to coast. I wouldn’t have known this if I had not read it. The highlight for most people is the giant rock which represents the Canadian Shield (and actually the hunk of rock really did come from the Canadian Shield!). I take a seat on some nearby rest points, and, as the subway rumbles under me, I recognize that park does it’s job. It’s well used and a meeting point for people. It’s excellent for people watching, for example  the people lining the other side of the street and sitting in the patio of Hemingway’s (more internal judgement). 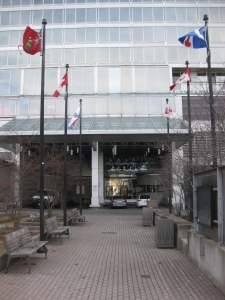 Down Bellair I go and I’m at Bloor Street. Needing to cross the street, I head towards Bay.  The Manulife Centre, 1974, presides over the intersection and its ill-fated scramble crossing. From mynew location, I get a good view of the ‘Mink Mile’ that is Bloor. A noted spotting is the Pottery Barn, whose facade alludes to its prior incarnation as the University Theatre.

I take a little detour down St. Thomas and catch a look at the sophisticated Windsor Arms Hotel, 1927. It actually reminds me of a fortress. This area wasn’t part of the original Village of Yorkville, but as mentioned earlier, borders have expanded and contracted, and somehow the area south of Bloor is lumped into Yorkville. The Windsor Arms fits in well with the swankiness of the neighbourhood anyways. As I’m admiring and snapping pictures, a UPS driver buzzes the door of the adjacent University Apartment. He doesn’t find who he’s looking for. 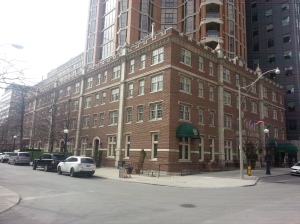 I have to let out an internal weep at what I see at the construction site on the opposing corner. There are Victorian facades fronting an empty pit, and I realize we’re about to get a facadist (ie, cop out) approach to preserving the heritage elements to whatever development is on the way. Shame.

Back on Bloor, I make a mental cue for Pink Floyd because I’m off to Yonge to end things where they began. It’s actually a sad note, because, like the site of Sultan and St. Thomas Streets, I note with a frown at the ‘progress’ on the Stollery’s site and how poorly the demolition unfolded. Across the way, One Bloor inches closer to completion.

12 responses to “Scenes From Yorkville”