The Scarborough Town Centre and Scarborough Civic Centre are located in the geographic heart of Scarborough. The former also makes up the main commercial and transportation heart, and, the latter and its adjoined public square hold the administrative, political and cultural heart of the borough.

I exit the Scarborough RT and descend first upon Albert Campbell Square. The area is akin to the space in front of Toronto City Hall. Like its downtown counterpart, the forum fronts a modernist (former) city hall with an open space and stage. It is also named after a famous mayor, who, in fact, was Scarborough’s first in 1967. The square hosts and has hosted many activities such as a farmers’ market, cultural celebrations, and, in my own history, elementary school folk dancing.

The 1973 Civic Centre itself – one of a number of Raymond Moriyama creations in Toronto – is the political nexus for Scarborough. Of course, when I call it that, I note that this was more the case during pre-amalgamation Scarborough. But the Civic Centre continues as an administration centre for many city departments. 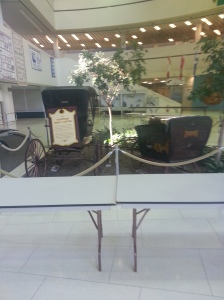 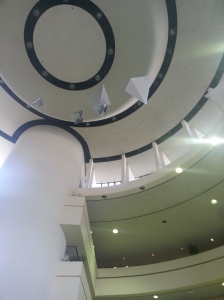 As with other Moriyama designs (North York Central Library, Toronto Reference Library), there are layers of floors.

After walking through the Civic Centre, I exit the other side. Crossing the street, I come to a field and an interesting piece of public art. The Hand of God is a hand perched atop a talk pole, propping up a man. Completed in 1973 by Carl Milles, it is symbolic of Mr. Campbell’s worldview (as expressed in the accompanying plaque).

There is construction around the south side of the Civic Centre, presumably for new condominiums. This is perhaps the latest identifying caveat – as demonstrated by the towers around Albert Campbell Square – it might also be a residential heart in Scarborough.

That construction was not a condo, but the Toronto Public Library’s newly opened 100th branch, the Scarborough Civic Centre Library! 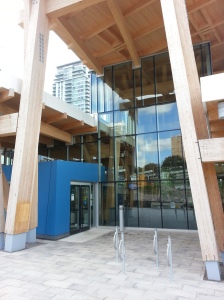 Walking inside, a new library smell greets me. I’m immediately struck by the abundance of light, wooden beams, and high ceilings. It’s actually a smaller space than I anticipated, but an amazing one nonetheless. As many have said, it’s a great addition to Scarborough and the Toronto Public Library system. 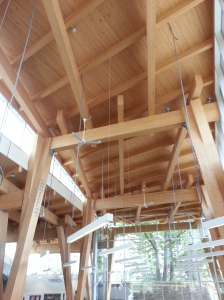 I sit down at one of the long communal tables to do some work, smiling as I periodically hear a parent ‘shhh’ing her children who are having an enthusiastic time at the KidsStop Centre. Library sounds. 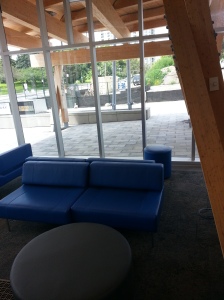 When I make my exit, I ponder the fenced off construction zone adjacent to the library. Curious about it, I circle back into the library and inquire about it with a staff member at the circulation desk. She graciously tells me there’s some landscaping happening and hopefully there’ll be a parkette-type thing by the end of the summer. That’s reason enough to return! 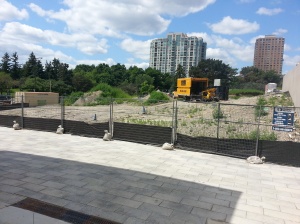 Rounding the library, I find myself back at the civic square where an information map stump thing catches my eye. I can’t help but think that it’s in an odd location. One has to stand in dirt to read it.

I admittedly study it more than one should. It’s clearly an outdated thing because Simpson’s, Eaton’s, and The Bay (in its original 1979 spot which Walmart now occupies) are still on the map!

The old Scott Farm House – Baton Rouge, as it’s now known – is looking pretty lonely in its spot north of the mall. 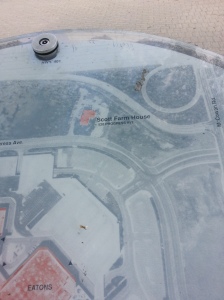 I’m taking a stab that this thing dates from the mid- to late-1980s. Reasons? The Scarborough RT opens in 1985 and Simpson’s ceases to exist in 1991 when The Bay bought it out. Incidentally, this precipitated a game of retail musical chairs where The Bay moved into Simpson’s, Sears moved into The Bay, Sears moved into Eaton’s when Sears bought it out, and finally, Walmart moved into Sears.  (Of course, now Sears is in trouble.)

I’m also going to guess that the wayfinding relic stump was moved here because the ‘You Are Here’ dot is not where I actually am.

For a look at the Scarborough Civic Centre and Scarborough Town Centre dated some time between 1973 and 1979, here’s a vintage image (original source unknown, although credit to HiMY SyED’s Flickr for the amazing find):

There is also a great blown up aerial shot of the area in the 1960s near the lower level food court in the hallway leading to the restrooms.