After checking out L’Amoreaux Park and Passmore Forest, a visit to Brimley Woods Park seemed appropriate.

Access to the woods comes from a trail off Finch Avenue. This path is part of the North Scarborough Green Loop, which uses streets, ravines, and parks to create a walking, biking, and running corridor in Agincourt & L’Amoreaux.

As expected, a look down at the East Highland produces a waterway that’s seen the effects of human interference. But what catches my eye more is the massive and thick orange canopy across the way.

The bending path continues on towards the Finch Hydro Corridor, but a bridge over the creek leads the way to the woods. 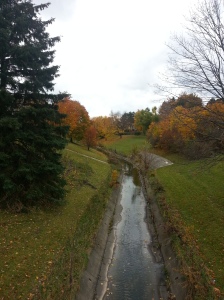 The first thing I encounter in Brimley Woods is what I initially think is a jungle gym. It’s actually the first activity station in the Vita Course – a fitness ‘gauntlet’, as I think of it. My first thought was that it was installed by one of the local schools, but I suspect that it’s something separate. 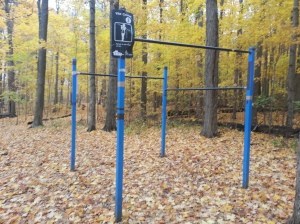 The second thing I encounter: a leftover from Halloween.

With the tall tree tops above and the leaves blanketing the ground below, I get to exploring the park’s meandering paths. At 8.1 hectares, it’s big, sure, but not too big. It’s very easy to orientate oneself and very hard to get lost.

The woods were part of the farm of Marshall Macklin, an Irish pioneer who came to Upper Canada in 1828 and settled here in Scarborough. The trees themselves are 100 to 200 years old.

Lot 24 (and 23) Concession IV, 1878 Illustrated Historical Atlas of the County of York. Brimley Woods is shown as a wooded area in the southernmost part of the lot.

In History of Toronto and County of York, Ontario,  Macklin is described as a Presbyterian, a Reformer, and amassing 500(!) acres of land to eventually leave to his 13(!) children. In The Township of Scarboro: 1796-1896, he is also noted as “the pioneer planter of trees along the roadsides…”, an example others apparently followed in the township. According to the Scarborough Archives, Brimley Forest was known as ‘Macklin’s Bush’ and later became a city park when the Macklin property was redeveloped.

Brimley Woods is considerably larger than Passmore Forest, and according to the Toronto & Region Conservation Authority, this is an advantage because allows for interior habitat for animals. Unfortunately, I don’t spot any on this day. There are people, though!

At one point I encounter a exit/entry point off Brimley Avenue, but instead opt to keep exploring. The entire time the same recurring thought keeps circulating in my head: “This place actually exists! In Scarborough! Why haven’t I heard of or been here before?”

When I do exit, it’s at the southeastern corner of the park. I follow the ravine back down to the Finch Avenue, passing some hillside planting. 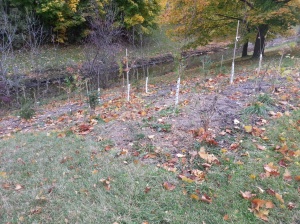 Where the creek runs under the street, a marker dates the piece of infrastructure. 1972. Sounds about right. The beginning of the suburbia in Scarborough.

By 1975, the Macklin farm would be completely subdivided and transformed by development. Forest Home would be integrated into its new surroundings, taking its spot at end of a cul de sac. At least we still have it and Brimley Woods. Or, as I should say, Macklin’s Bush. 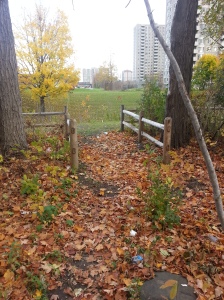 Near the heart of Scarborough, in a neighbourhood known as Midland Park, one can find Birkdale Ravine.

The entrance to Birkdale Ravine is marked with the expected Parks signage as well as one funded by Livegreen Toronto, but as I get into the park, there’s a wooden post also lovingly welcoming me. But sadly, it isn’t marking the start of the trail or personally wishing me well on my hike. No, the Birkdale Ravine must’ve held a race here some time. 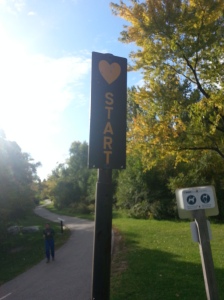 Running through the ravine is the West Highland Creek.  The Highland Creek as a whole snakes diagonally from its mouth in Port Union to L’Amoreaux. Its watershed and ecosystem encompasses the majority of Scarborough (the Rouge River making up a small portion).

The first thing I notice out the creek is that it’s depleted and not very fast flowing, but above all, it’s naturalized. The portions of the Highland I’m used to – the parts north and west of here – have all been channelized with the creek flowing on a bed of concrete.

The trail itself is serene and tranquil with the changing colours offering great scenery. It’s also well used as recreational space with a number of power walkers crossing my path.

Over by the stream, there’s some activity too. On one side of a bridge (the first of two here), there’s a pair of individuals wading in its waters. On the other side, a flock of Canada geese take their rest. 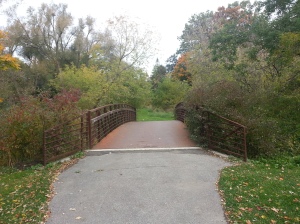 A great thing about Birkdale ravine is its physical connections to the surrounding community. There are five access points to the park (and the two main ones at Ellesmere and Brimley).  Some neighbourhoods are defined by their parks (Trinity Bellwoods, Withrow Park), and, it’s amazing for the people of Midland Park to have this gem literally in their backyards. 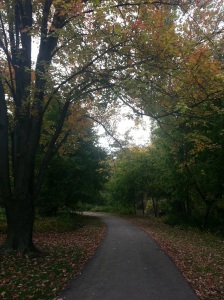 But with everything gorgeous and amazing, I have to have a little chuckle at the shabby signage by the second bridge of the trail. Replacements, maybe?

The path ends at Brimley Road, where there’s a marker from the Scarborough Historical Society. The north bank of the ravine, where I just came from, was the site of a Wendat village excavated in 1956. The plaque also mentions a burial ground in a park east of here. There’s a great Historicist piece on that.

With that, it’s the end of my trek. Highland Creek continues south through Thomson Park, but that’s for another day. I make a plan to explore this waterway little by little. 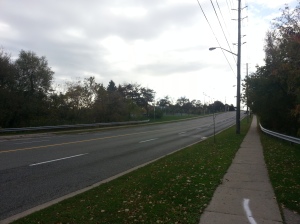 I Heart Scarborough – Thomson Park & The Birkdale Ravine: A Mini-Essay

Posted in Parks and Trails, Scarborough

Agincourt began as 19th century farming village far from the reaches of Toronto. The Edwardian homes are beautiful and unexpected pieces of architectures. With their great verandas, colourful gardens, and sizable backyard lots, it is fun to stop and examine them. 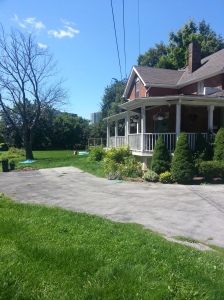 I like to imagine the lives their original residents in the late 19th and early 20th century on streets like Agincourt Drive, Lockie Avenue, Ross Avenue, and Donalda Avenue: how they walked the same streets and went to some of the old landmarks that still exist, like Agincourt Jr Public School, built in 1914.

But while this area is lined with historic century old structures and streets,  it’s important to note that almost along side them are houses – many of them bungalows – built in the post-WWII suburban boom.

Steps away from the Agincourt Jr Public School – ‘Little A’, as it’s locally known – is its younger ‘big’ brother Agincourt Collegiate Institute. It has the distinction of being the oldest high school in Scarborough, beginning in 1915 on the second floor of Little A, before getting its own building (known then as Agincourt Continuation and later Agincourt High School) on Midland Avenue, which was in turn demolished in the 1950s to make way for the current expansive school. 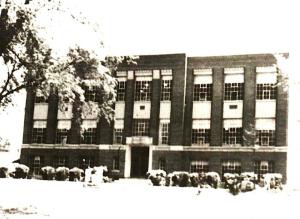 Further down the way on Midland is Knox United Church, another of the old landmarks of Old Agincourt. Although the church has had a presence here since the mid-19th century, the current building dates from 1872 when it was known as Knox Presbyterian Church. 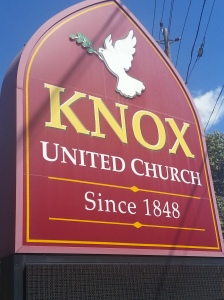 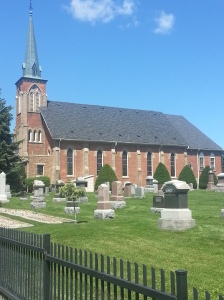 Up Glen Watford is the Agincourt Recreation Centre. It’s the second of its kind as a neighbourhood gathering spot, following the old Agincourt Community Centre. There’s a neat little gate from 1951 in front which serves as a great tribute to North Scarboro (note the spelling) and Agincourt. 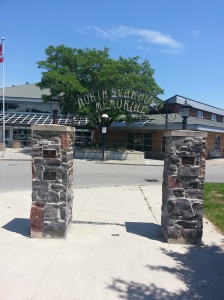 Also on Glen Watford, one can find the Dynasty Centre – a largely East Asian commercial centre reflective of the cultural and culinary diversity of Agincourt and Scarborough as a whole eventually came to known for. It’s home to One2 Snacks, a reputable and delicious Malaysian eatery. 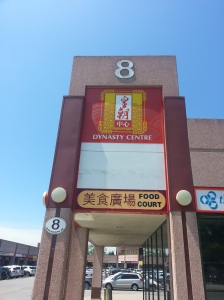 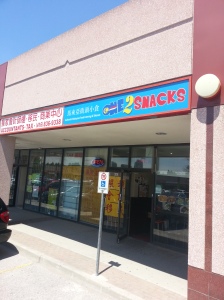 Midland and Sheppard is the western border of the Sheppard East Village BIA, and many Asian enterprises hold membership in it. Many of the businesses display dual languages as a result. 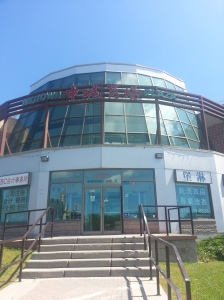 On the southwestern corner of Midland and Sheppard is an empty, abandoned, derelict flea market. One wonders what’s to come of it.

The stretch of Sheppard between Midland Ave and Kennedy Road has seen a lot of activity lately. The recently completed railway underpass project has returned traffic to non-chaotic levels. The Sheppard East LRT should run through it – eventually.

The railway was an important marker in the village’s growth, and today there is a GO Station to move people and in and out. One can also pass by several old homes that have been (horribly) converted to commercial enterprises as well a very depleted and urbanized Highland Creek.

At the corner of Kennedy and Sheppard stands Agincourt Mall. My memory recalls when Walmart was a Woolco, No Frills was a Loblaws, and the complex with Shopper’s Drug Mart and BMO did not exist. There was also a gas station on the northwest corner where the path and greenery exists.

This area also houses the Agincourt Library (on the second floor is a small exhibit on the history of the village) and an adjacent condo construction project. A selling point in the billboard lining the site is that it is “steps from the proposed LRT.” 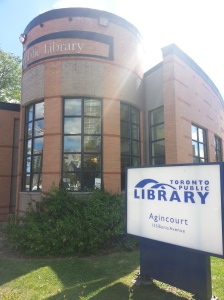 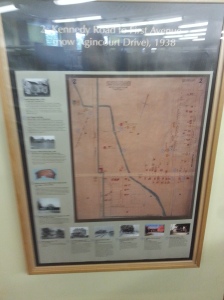 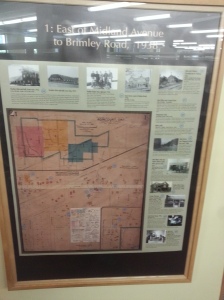 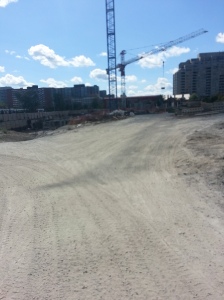 On the west side of Kennedy north of Bonis is a bridge with a great view over the Highland Creek. The trail it leads to offers a nice escape. It’s hard to imagine that this creek at one time might have been vital to the original residents and their crops. Today their farms are covered by the houses and businesses (including the Tam O’Shanter Golf Course) of later generations. 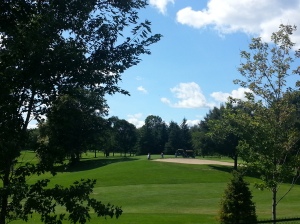