I have a borderline obsessive transit habit. Whenever I travel out of Kennedy Station, I have to sit on the north side of the subway car. Doing that gives me a good view of Warden Woods going by Warden Station and of the Don Valley as it passes under the Bloor Viaduct.

But sitting on the north side of the train presents another sighting: the pedestrian bridge at Victoria Park Station. For the longest time, I never knew what it looked like inside. Or where it went. Or if people use it.

Now, walking through it for the first time, I know the sky bridge over Victoria Park Avenue leads to Crescent Town, the towered community in the southeast corner of East York. And yes, people use it. It’s an important link for them and their main transit hub.

My introduction to Crescent Town comes with a neat mural that summarizes the neighbourhood with beautiful scenes of its past and present. Funded through the city’s StreetARToronto program, it’s entitled ‘Tempo, Toil, & Foil’ and was created by artists and community members. 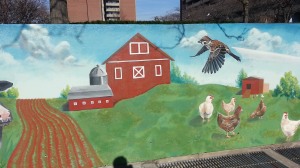 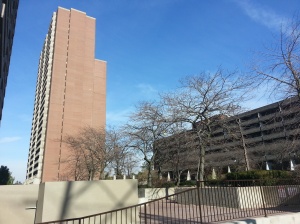 This is Dentonia Park, the 6-acre athletic field that fronts a courtyard and its surrounding apartment towers. It’s named for Dentonia Park Farm, the dairy farm established here in 1896 by Walter Massey of the famed Toronto family of benevolent industrialists. It was named after his wife, Susan Denton Massey. Dentonia Park Farm stretched from Dawes Road to Pharmacy Avenue and Dentonia Park Avenue to Medhurst Road.

Dentonia Park Farm aerial, 1956. Source: City of Toronto Archives. The section of Victoria Park running adjacent to Crescent Town was built when the community was built. 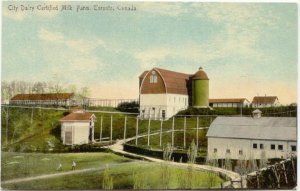 Dentonia Farm Postcard, circa 1910. Source: East York Then and Now.

Despite the continuity of open space, it’s hard to imagine what this land would’ve looked like a hundred years ago. But I get a little sign of it through the unusual rolling contours in the otherwise flat park. I don’t know it for sure, but my hunch is that the dip in the land hides a former creek valley. 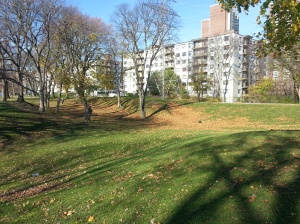 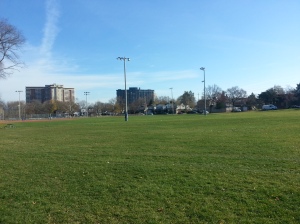 At the far west end of the park, a tree lined path shields a bit more history about Dentonia Park Farm. The ‘Crescent’ in Crescent Town also goes back to the Masseys, who gifted land for Crescent School, once located here. 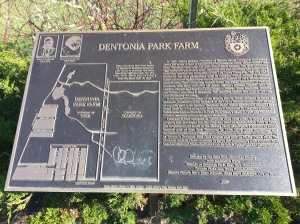 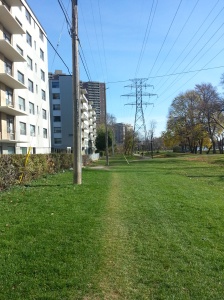 Following a corridor of hydro towers (more on that later), I circle back around to the main path and find a way down to Crescent Town Road and Massey Square. Ringed around the streets is the second group of towers in the community.

Massey Dairy Farm was bought by developers in 1969, and by 1971, they constructed apartment towers and marketed the area as Crescent Town, a new way of living in the city. 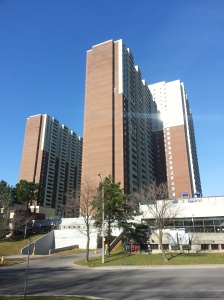 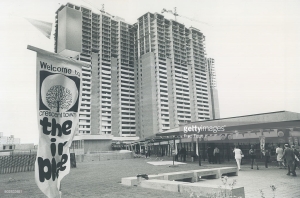 This development wasn’t isolated to Crescent Town. Across Toronto in the 1960s and 1970s, tower living became the planning focus of the city. Communities were created out of former farms, and then marketed as having onsite amenities  – laundry, shopping, recreation – and conveniently located near transit or highways. The objective of these high-rise towers was to make a profit out of low-cost social housing. 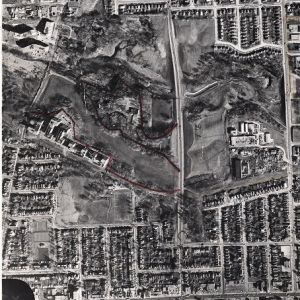 But the problem with communities like Crescent Town and St. James Town (and Regent Park, for that matter) was that as much as they were made to be their own self-contained ‘towns’, it instead made them isolated from the city around them. 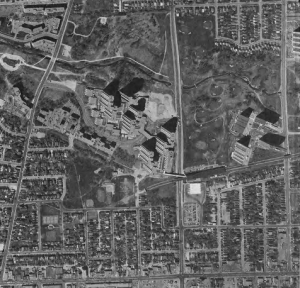 As I approach the towers of Massey Square, I’m reminded of a fortress. My goal is to get to the creek trail I know exists on the other side, but I’m not sure if I can get there through the wall of highrises. It’s a definite physical and psychological barrier. Instead, I walk to Victoria Park to get there, passing Crescent Town Elementary School. 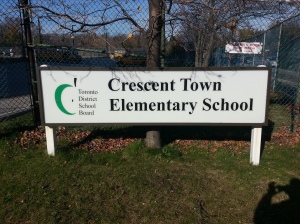 One isn’t cognizant of city borders while traveling them (or, at least, I’m not), but across the road is Dentonia Golf Course (also once part of the Massey property) and Scarborough. I’m standing in East York. Further south is the Old City of Toronto. It’s a neat crossroads. It’s our local Four Corners USA.

A long stairway leads into the valley of Taylor-Massey Creek. With winter approaching, it’s a rather dead and haunting scene. But even so, it’s easy to see this is a great space. 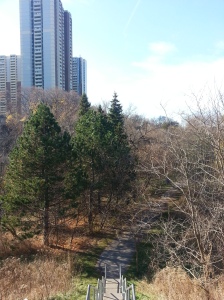 There’s a constructed wetland, and several paths that traverse the rolling topography of the park. By a lookout point, there’s the remnants of a little fire, freshly extinguished and filling the air with its ashy aroma. 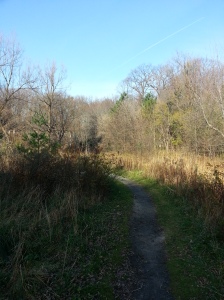 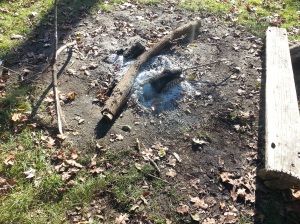 At the park’s highest point, I find the Massey Goulding Estate house, otherwise known as Dentonia. Constructed here in 1921, the cottage is built in a very distinct Tudor style. I struggle to think of other examples of Tudor architecture in the city – there seem to be very few, so this is a treat. Perfectly positioned to overlook the farm once upon a time, Dentonia is its last remaining structure today. 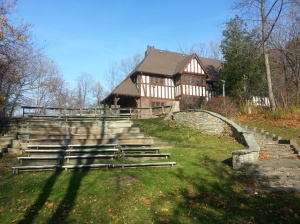 Dentonia Farm Postcard, circa 1910. Source: East York Then and Now. 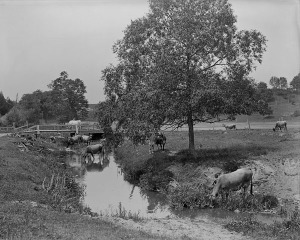 After the dairy enterprise ceased, the house and park came under the ownership of the Borough of East York and then the City of Toronto. Children’s Peace Theatre – celebrating its 15th year in 2015 – now makes its home inside (and outside) Dentonia.

Descending some ancient narrow stairs back down, I follow Taylor Creek Trail under and past Dawes Road. Taylor, by the way, is the other old, industrious Toronto family, who owned mills along the Don River, including Todmorden Mills.

Taylor Creek Trail continues westward until it meets the Don River near the Forks of the Don. Tracking the trail the entire way sounds like fun, but I opt to take that adventure another day. Instead, I make towards the trail’s entry/exit point towards Lumsden Avenue. 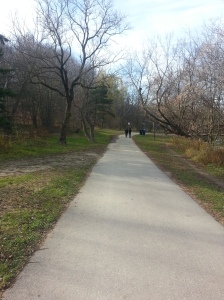 Lumsden isn’t my goal, however – the Taylor Creek Hydro Corridor is. I’m fascinated by this informal path because of its former incarnation as a railway corridor. Looking at the dead vegetation lining it only increases the thoughts of ghosts and past lives.

Yes, Taylor Creek Hydro Corridor once housed tracks for the now defunct Canadian Northern Ontario Railway, which ran from the also lost Todmorden Station on the north side of Don River, through Taylor Creek valley, and northeast into Scarborough and beyond. It bisected Dentonia Park Farm (now at the north end of Dentonia Park).

The Bloor-Danforth subway tracks between Kennedy and Victoria Park Stations are the only tangible remnants of the CNOR’s former corridor in Toronto, which was out of use in the city as early as 1925. (And here I thought the subway was carved out of farmland and expropriated homes). The rest has been swallowed up by the city around it. If one looks, however, the signs of existence are there. (Note to self: take on this adventure).

Following the hydro corridor east would bring me back to Dentonia Park, but I make my exit at Eastdale Avenue. Concluding my travels, I find my way back to Dawes Road and follow its odd diagonal routing down to The Danforth. That too is something to explore. 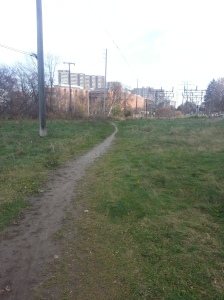 Edward Relph – Toronto: Transformations in a City and Its Region – ‘Chapter 5: A Post-suburban Skyscraper City’

Toronto Star – “Once Upon a Time: Dentonia Park born of Massey’s dairy dream” by Valerie Hauch

8 responses to “Scenes From Crescent Town”