I’m at Yonge and St. Clair. It’s my second Explore Toronto Meetup, the first – a stroll through Rosedale and Yellow Creek – concluding in this very spot. We’re picking up where we left off with a walk through the Vale of Avoca and Mount Pleasant Cemetery.

To start things off, despite boasting a time when the area witnessed deer trotting around, Deer Park is very post-WWII. Heading east on St. Clair, I see the Weston Centre, built 1975. As its name might suggest, it houses the headquarters of the mighty George Weston Ltd. empire. 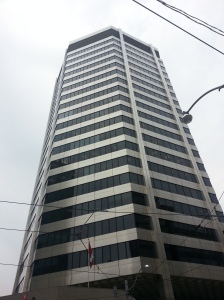 Beside that is Deer Park Library, a 1952 construction designed by Arthur Eadie. Personally, it’s actually a boring structure as far as libraries go, but not every branch can be a handsome Carnegie or a swanky fortress of glass, can they? Deer Park is very 1950s – simple, modernist, in starch contrast to the extravagance of the 1930s. Across from the library is the Arthur Meighen building, itself of the mid-1950s.

Looking east on St. Clair, it’s hard not to think about the bridge that spans the deep Vale of Avoca ravine. Our river valleys are great gems, but they’ve been barriers in the past to building a city with, well, continuous roads. The St. Clair Viaduct came to us in 1925. Before that, a narrower bridge taking a diagonal path was used to cross the valley.

The railings that line Avoca Avenue are from the original pre-1925 bridge. 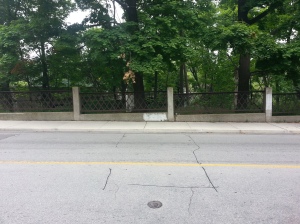 I overhear someone in the group reflect that Shanghai and Toyko don’t have the natural spaces as Toronto does. I don’t know how true it is, but go us! With that colouring my thoughts, we enter the Vale of Avoca where the former bridge once existed. It’s a rather ‘fun’ descent with steps of worrying steepness and edge.

It’s not long before one realizes the tranquility of this urban yet rural space. Yellow Creek, as slow moving as it is, flows down below. Around us is just wilderness. One has to wonder how magical this place would look in autumn. You can just look up at the slopes of the ravine and realize how far deep you are.

But civilization offers its reminders of its existence once in a while. At the arches of the viaduct, the thumping of automobiles above informs us, “You’re not that far away, explorer.” 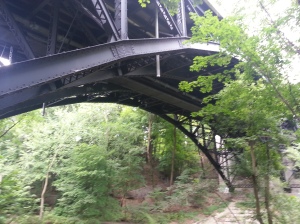 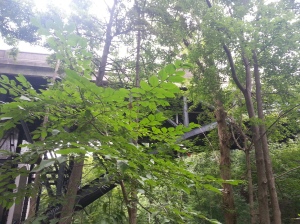 Moving past a lookout point over the stream, the path transitions from the cool canopied-top ravine to the warm openness of Mount Pleasant Cemetery. It was opened in 1871, although wasn’t annexed into the City of Toronto until 1914. Yellow Creek (and a pond!) once ran through the cemetery’s grounds before being buried sometime in the second quarter of the 20th century (a guess based on these Toronto Historic Maps).

I have a moment where I realize I’ve been to a few a cemetery tours in Toronto and can pick out the rhyme and reason of Mount Pleasant. The significance of park-style layout, the beautifully landscaped plots, the obelisks, ‘cut’ monuments, Celtic crosses: I totally get it. 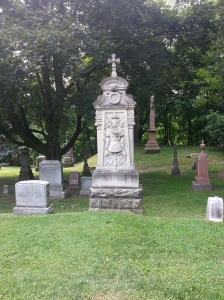 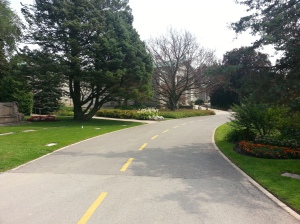 At a pause in the group’s trek through the expansive path, I rush away to get a look at the nearby Mount Pleasant Mausoleum, built her in 1920. Distinct in its NeoClassical styling, it’s fronted by a beautiful line of gardens.

In addition to the thousands of loved ones buried here, Mount Pleasant hosts a formidable group of luminaries from Toronto’s and Canada’s past. Glen Gould, Foster Hewitt, Oliver Mowat, Steve Stavros, the families Weston, Massey, and Eaton (the latter two clans with full mausoleums) are just a handful of names.

The structure of our group walk doesn’t really allow for a lot of ‘site seeing’, but our path does come across at least two notable monuments. The first is ‘The Resting Place of Pioneers’, a tribute to the unnamed persons from the original town of York that were moved here after the closing of Potter’s Field in Yorkville. There’s a similar marker in the Toronto Necropolis as well.

The second is a ‘can’t miss grave’ if only for the number of signs erected around it. It’s of William Lyon Mackenzie King, the longest serving non-consecutive prime minister in Canadian history and also noted for his spiritualism, dog loving, and discriminatory racial policies. 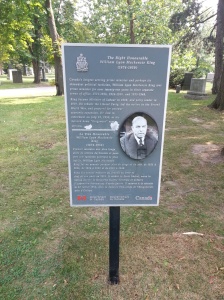 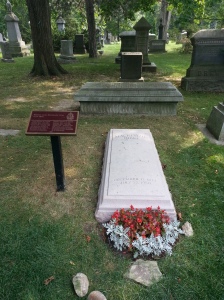 It’s a short distance past Mackenzie King, we make our exit. It’s a dissatisfying feeling after not seeing more, but I do remind myself that I am a solo explorer most of the time and the cemetery is massive (we only went through a portion of its western half). I’ll have to return again for a more in-depth reprisal.

As a bonus sight, we come out to the Toronto Beltline – a trail that’s the remnants of a short-lived, decommissioned rail path. It’s itself an adventure (or two), which I add to the ‘to do’ list. You have to give credit to Toronto’s non-road network – one can go from Rosedale to the former City of York without traveling down a street.

The Beltline trail also hosts the second lookout point of the day, this time swapping a water corridor for a transit corridor. The bars framing the subway tracks like prison constraints is somehow a propos for the city. 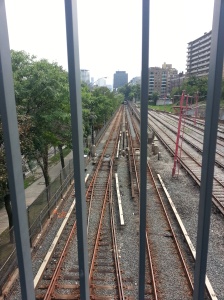 3 responses to “Scenes From Vale of Avoca & Mount Pleasant Cemetery”