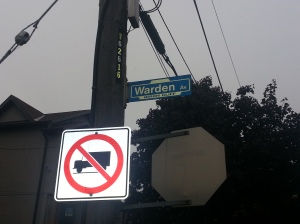 Arriving on 69 bus, I find myself at the intersection of Kingston Road and Warden Avenue in the Birch Cliff neighbourhood of southern Scarborough. As a northern Scarberian, I’ve never been here before, but it’s a place I at least recognize through my fascination of ‘Before and After’ images.

Warden Avenue and Kingston Road, 1950s-60s to Today. Note the continuity in the bus and bank in both images. Credit: Scarborough Historical Society

I cross the street and stand in front of Taylor Memorial Library. I’m here to see a talk given by Historian Allan Levine on his new book ‘Toronto: Biography of a City’, which is part the Toronto Public Library’s Eh List. It’s 5:50pm. The talk isn’t for another hour and ten minutes, so I get to explore Birch Cliff – or a tiny bit of it, anyways. The first thing that strikes me is the road construction. Kingston Road is seemingly always under perennial maintenance. Must be a headache for Birchcliffians (?).

Warden Avenue south of Kingston is the only portion of the throughway that isn’t served by public transit. It is narrow, tree lined, and entirely residential. Above all, it’s quiet and quiet nice. There are a number of people outside as I walk, and I wonder how they feel about living here and if there’s some kind of Birch Cliff identity. The houses themselves are a mixture of older one-storey homes, bungalows, and post-modern creations. 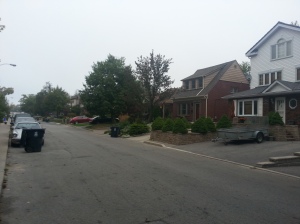 Eventually, I come to the foot of Warden Avenue. It’s not exactly a landmark, but it’s cool enough to me. Where the street ends, a path begins. As I walk, I hear crunching under my feet. There are fallen nuts or something embedded in the sand. I pick one up as a souvenir and place it in my bag.  At the end of the path is a gate – or, at least, was a gate. Past it is, of course, the Scarborough Bluffs. I can hear the waves from where I am. It looks as though someone might’ve attempted this descent or at least part of it, but it’s not an adventure I’m up for, so I turn back. 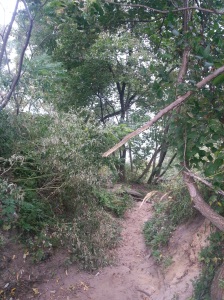 I return to Kingston and start heading west. The street was built as a motel lined highway into Toronto – the Dundas Street of Scarborough, if you will. The strip of shops near Warden features a cafe, an empty store, and a bar with karaoke.

As I keep walking, I’m not awed. It’s a rather sad street, and that goes beyond just the construction. Looking across the way, there’s nothing lively – certainly not like the stretch of Kingston that runs through the Beach. 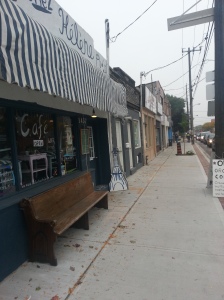 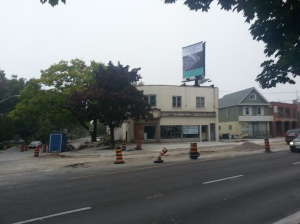 Continuing on, to my left is a long fence with trees rising above it. I have no idea what’s on the other side. When the opportunity is right, I peek my head over. A golf course. Further down, I put it all together. This is the Toronto Hunt Club, which is fed in by a private road. It’s a long established organization, and has been here for at least a hundred years. 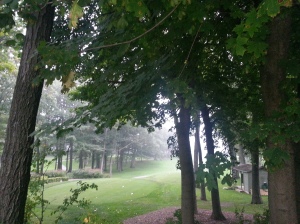 Kingston does a curve and turns residential for a bit. At Blantyre, I have to head south. Before that, I stop in at the Petro Canada. It’s a fortuitous break because with all the walking, I forgot to pack water with me (number one rule for an explorer). I refuel and continue. It’s somewhat fitting considering my destination – a great big water temple. 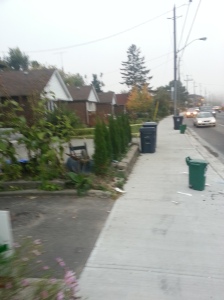 But first, Blantyre reminds me a bit of Warden Avenue in its array of homes, but it’s clear that it’s a bit more upscale (understandable as I’m closer to the Beach). At Queen Street, for example, are houses that require a stairs to get to. 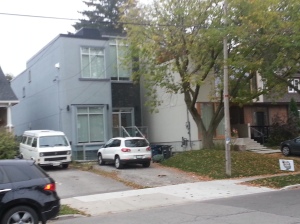 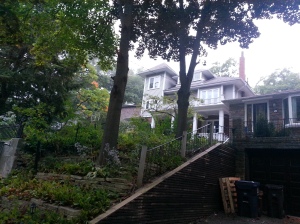 At just after 6:30pm, I cross Queen Street and find myself before the R.C. Harris Water Treatment Plant, a long yellow building with a massive lawn. I get in close to inspect it while a couple dogs (with their owners nearby) come in to inspect me. I amicably oblige them for a bit, but know I don’t have too much time. What I see is impressive, but I know the other side is where the real marvel lies. 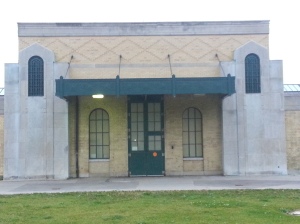 Immortalized in Ondaatje’s In the Skin of a Lion, rhe R.C. Harris Plant, named for Roland Caldwell, the city’s Public Works Commissioner at the time of its construction, is one of the most photographed landmarks in the city. I have to join the masses in capturing its grandeur. It is built in the Art Deco style of the 1920s and 30s, the same as Commerce Court North – although it is nothing like that tower. This is industrial architecture at its finest and because of it, I’m pretty giddy. 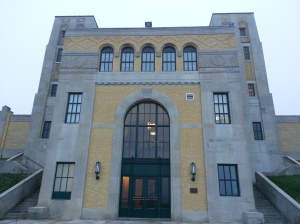 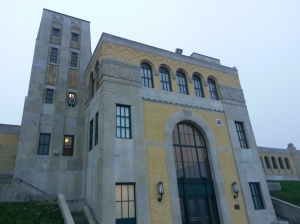 The facility is located at the foot of Victoria Park Avenue, which is  named for the amusement park and forestland that the treatment plant now occupies. As I meander around and note individuals with their animals and/or human companions, it’s funny how it’s still a gathering place – an odd one if one thinks about it. “Let’s take the dog out for walk to the water treatment plant and we’ll talk as well.”

I head down to the water and capture it from below. It’s a moody day, and part of me was hoping for an animated sunset, but there’s still something appealing with the dreariness and fog. There’s no rain, though – that’s a plus. 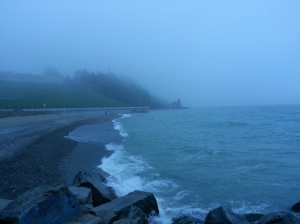 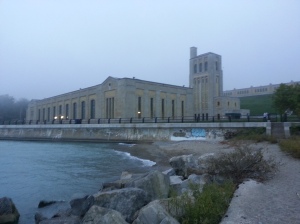 My phone indicates it’s 6:50pm, so I regrettable decide to leave Mr. Harris’ great achievement. I know have to get a move on in order to make Mr. Levine’s talk without being too late. I’m not helped by the fact that it’s almost entirely uphill to Kingston road – from the shore, up to the plant, to Queen Street, and up Courcelette Road. I’d take my time to admire the street, but I’m too winded to give it thought. I haven’t been through such strenuous exercise in a while. When I consider it, I’ve missed it and make a note to put myself through that – under less stressful circumstances. By the time I reach the main road, it’s dark. The fog reflects beautiful on the street lights and I can’t resist one last picture. 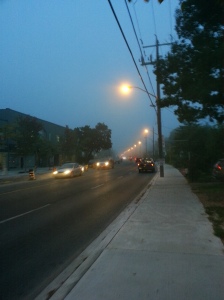 I’m directed to the back meeting room where Mr. Levine has already begun lecturing on his book. It’s a great presentation on the ‘life’ of Toronto – Muddy York, The Toronto Maple Leafs, The Ward, The Orange Order, former mayor Nathan Phillips – a lot of which I know about, but still some that garner notes in my Moleskine.

The audience discussion that follows it is most interesting. There were comments about the inadequacy of Toronto’s infrastructure (the TTC at the centre, naturally), how Torontonians are whiners, and, most notably, how the city is soulless. Thinking of my day today, I argue that city does have a character and soul. The examples of soulful cities given include Montreal, Quebec City, and European metropolises. I suppose their souls are wrapped in long, documented histories. Toronto’s is perhaps less obvious, but I say it’s character lies in its neighbourhoods – like Birch Cliff – and the landmarks within them – like the R.C. Harris Treatment Plant. I think it’s a fair point and very fitting given the evening I’ve had.

It’s worth noting that what I saw today is only a small portion of Birch Cliff. The Quarry Lands at Victoria Park and Gerrard, for example, were a big part of the area once upon a time and now await aan uncertain future. Their exploration also await me.

One response to “Scenes From Birch Cliff and the R.C. Harris Water Treatment Plant”