Scenes From The Elgin and Winter Garden Theatre Centre

The Elgin and Winter Garden Theatre Centre is a very intriguing Toronto landmark. In addition to being perhaps the only double-decker theatre left on the continent, it is also  a National Historic Site (NHS) as of 1982, making it a cultural icon on a national level. Beyond its significance as a modern performing arts centre and a movie house before that, it houses the greatest collection of 1920s Vaudeville props and sets.

Unlike most National Historic Sites which have undergone adaptive reuse as museums (Fort York) or commercial establishments (The Distillery District), the Elgin and Winter Garden continues to be a fully functional, money making enterprise. This presents an interesting situation because as a NHS it must protect, promote, and manage the heritage values – while also existing as a living venue whose primary goal is to put on productions and attract paying visitors.

Corridor leading from the main doors

The Centre was designed with allure of grandeur. The ornamental gold on the walls and the marble columns are just that – finishes. Being at the Centre is as much about witnessing a spectacle inside the theatres themselves as much as it outside of them.

Managing the heritage aspects of the theatres while trying to keep it operational I learned is a tough task if only because one encounters heritage everywhere. I found out that it is about finding a middle ground, a compromise – being the least invasive. Often this involves creative solutions to issues. 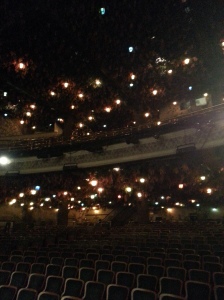 The Winter Garden Theatre was closed in 1928, which left it in a time capsule until the Ontario Heritage Trust rescued and restored both theatres in 1981. The walls, which had taken 50 years of dirt, had to be cleaned with bread dough so as to not disturb the designs underneath. The leaves hanging from the ceiling (barely visible in the darkened picture) had to be made fire proof because they are otherwise a hazard. 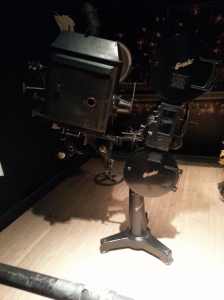 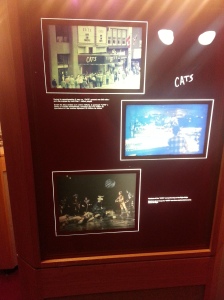 Perhaps the most famous production in the Centre’s history 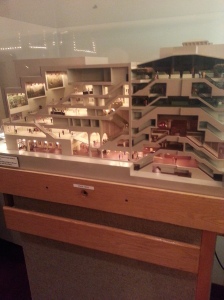 Model of the Theatre

The theatres have museum-like elements with a number of exhibits including the original camera and electrical panel backstage and information on the famed shows (including the wildly successful “Cats”) that have graced its stages. Notable  is a detailed model of the entire complex. It’s fun to note that the theatres themselves were built to front onto Victoria Street because real estate was more highly priced on Yonge Street (like it is today). With the 100th anniversary of the Elgin Theatre this year, there have been more opportunities to showcase its animated history.

Special thanks to The Architectural Conservancy of Ontario‘s Next Gen group for allowing this inside look. They allowed me pleasure of shadowing the General Manager, Brett Randall, as well as some of his staff at the Elgin and Winter Garden Theatre National Historic Site. The multi-perspective insight on how to run a heritage site and a performing arts venue was a treat.