The Curious Listing of 28 Jameson Avenue in Parkdale, 1895

In the July 6, 1895 edition of The Globe newspaper, an impressive 14-room house appeared for sale. It was listed at 28 Jameson Avenue in South Parkdale, fronting onto Lake Ontario which a spacious lawn and private boardwalk. The advertisement promoted the property as nothing less than idyllic.

At first glance, the listing of 28 Jameson Avenue provides a window into the real estate market and lives of residents of late-Victorian Toronto. While it does accomplish this, the events in the home in the year before this listing offer not only a dark anecdote in Toronto’s history but a dark insight into the potential reasons for its sale only five years after its owners moved in. 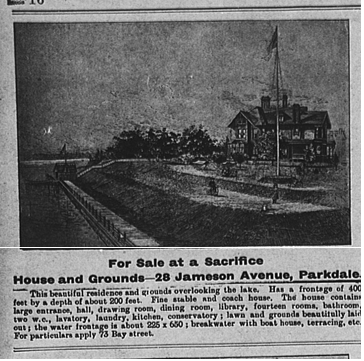 “For Sale at a Sacrifice”, The Globe, July 6, 1895. Source: Toronto Public Library & Globe and Mail Archives.

The owners of the property were the Westwoods, who moved into the house in 1890, appropriately naming it “Lakeview”. The patriarch, Benjamin Westwood, was a successful industrialist who co-owned “Allcock, Laight and Westwood”, a famous fishing shop on Bay Street. Because of Benjamin’s business forays, the Westwoods were a very well-to-do family, moving from 11 Walmer Road in the Annex to 28 Jameson Avenue. By the time they reached Parkdale, the suburb was only in existence for 20 years and had been annexed by the City of Toronto the year prior, and was filled with other Victorian mansion and affluent families — although not exclusively. 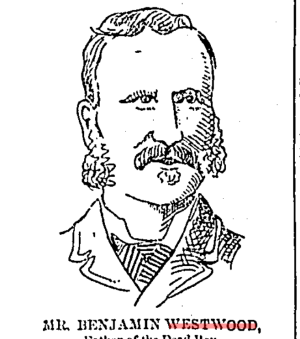 On the night of Saturday, October 6, 1894, the Westwoods’ lives changed forever. The doorbell rang at Lakeview, and Benjamin’s son, Frank, went to answer it. An unknown character on the other side of the threshold pulled out a gun and randomly shot the 18-year old man. As the assailant disappeared, the young Westwood cried out. His mother, Clara Westwood, found him in agony at his front door. Frank Westwood succumbed to his injuries days later and was laid to rest at Mount Pleasant Cemetery.

“It May Be Murder,” The Globe, October 4, 1894. Source: Toronto Public Library & Globe and Mail Archives

The murder captured newspaper headlines for weeks and months following the unfortunate event. The police identified, Clara Ford, a 33-year old, mixed-raced who grew up in Toronto’s ‘Ward’ neighbourhood and was known to dress in men’s clothing (as she was accused to have done the night of the murder). After police questioning, she admitted to gaining revenge on her neighbour Frank Westwood who harassed her for her darker complexion and ultimately raped her. In Ford’s trial the following year, the woman was acquitted, claiming that her confession was forced and false. Clara Ford was set free and soon left Toronto, although not before boasting that she did kill Westwood. The murder itself remained unsolved even until today.

Although much was made of the sensationalist trial, the fate of Clara and Benjamin Westwood after the events of 1894-5 is less discussed. The family put Lakeview up for sale months after Ford was found not guilty. One can imagine their heartache in living in the home where the horrific event took place. The 1895 Might’s Toronto City Directory listed the occupants of 28 Jameson Avenue as ‘Vacant’, but the following year’s Directory noted ‘Benjamin Westwood’ at the address once again. An 1896 Globe article confirmed the house was still unsold two years after Frank Westwood’s death. The publication also noted Westwood was living at the address in 1897. Ultimately, the house went to George Edwards, who lived in the house by 1899.

Leaving Parkdale, the Westwoods looked to continue with their lives in other, perhaps familiar areas of Toronto. They first moved into a home on Bloor Street East near Huntley Street. By 1902 however, they found themselves in the high society of Rosedale at 90 Scarth Road, often making the newspaper’s “Social” column and the Blue Book. A ‘quiet’ wedding of their daughter to a Chicago man took place in the residence in 1909.

Benjamin Westwood himself died in 1935 at the age of 90. By this time, he and his wife lived on St. Clair West near Yonge Street. The elder Westwood was buried at Mount Pleasant Cemetery where his son was laid to rest nearly 40 years prior. None of the houses the family lived in after (and even before) Lakeview stand today. 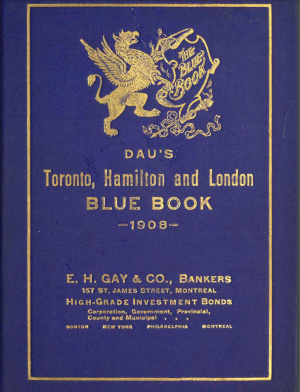 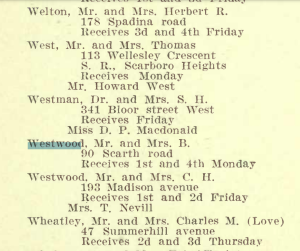 For 28 Jameson Avenue itself, the future was also not as fortunate after the Westwoods left the property. By 1910, George Edwards moved out of the home and Arthur Penman came in. In the mid-1920s, Lake Shore Boulevard West was constructed just north of the address, using Laburnam Avenue as its right of way. It looks as though the home survived expropriation at that time. Penman was seemingly the final owner of 28 Jameson Avenue, however, as the address last appeared in the Might’s Toronto City Directory in 1931. Thirty years after the creative destructive effects of Lake Shore Boulevard West, the Gardiner Expressway obliterated the rest of South Parkdale in the mid-1950s.

Today, the existence of the Westwoods’ Lakeview mansion is undetectable. Its violent history some 125-years ago is hidden somewhere in the grassy parkland between the Martin Goodman Trail and Lake Ontario.

Jameson Avenue in 1957, just prior to the installation of the Gardiner Expressway. The Westwood house stood just north of the large mansion at the foot of the street. Source: City of Toronto Archives.

Looking towards the site of 28 Jameson Avenue, 2021. Source: Google Maps

The Dreams Attached to Places: From Suburb, to Slum, to Urban Village in a Toronto Neighbourhood, 1875-2002, Carolyn Whitxman, MA. A Thesis PDF

Goad’s Atlas of the City of Toronto: Fire Insurance Maps from the Victorian Era, goadstoronto.blogspot.com/.