Scenes From The Danforth (Broadview Avenue to Pape Avenue)

For a history of Danforth Avenue, a good place to start is the Playter Farmhouse at the head of Playter Boulevard on Playter Crescent. Although the family had roots in Toronto since the 1790s with land holdings east and west of the Don River, the house was not built until the 1870s. 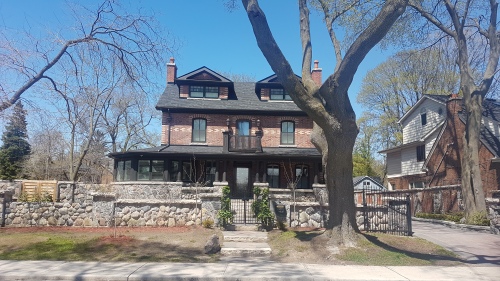 When the Playters came here, virtually nothing of modern reference existed. Danforth Avenue was laid out as Concession II in the 1790s when York Township was surveyed, but it did not become a usable road until 1851 when the Don and Danforth Plank Road Co. redid the street. Broadview Avenue north of Danforth was known as Mill Road or Don Mill and also was laid out in the 1790s while south of Danforth the street came by the 1860s. Modern day Ellerbeck, Pretoria, and Cambridge Avenues were the first local streets to appear around that time. 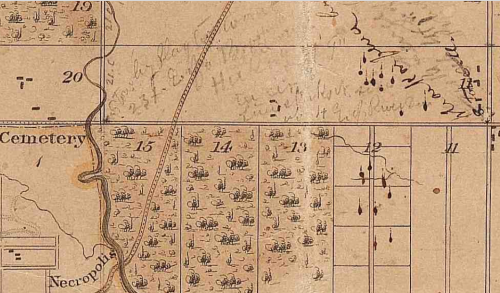 Danforth Avenue in the JO Browne Map of the Township of York, 1851. Credit: Historical Maps of Toronto 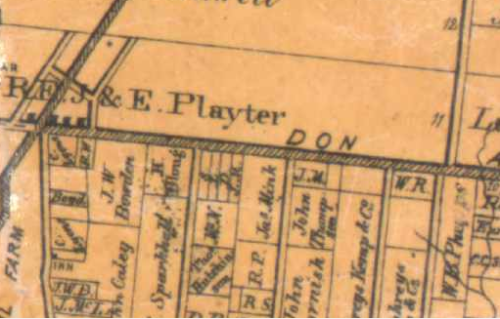 The Playters sold off their land over the coming decades and the street grid gradually took its present shape. By the 1920s, Bayfield Crescent looped around the remaining Playter property to surround the old farmhouse. What we today call the Playter Estates came to be filled with beautiful now multi-million dollar Edwardian homes with the occasional Ontario workers’ cottage, hinting at the perhaps humble origins of its early residents. 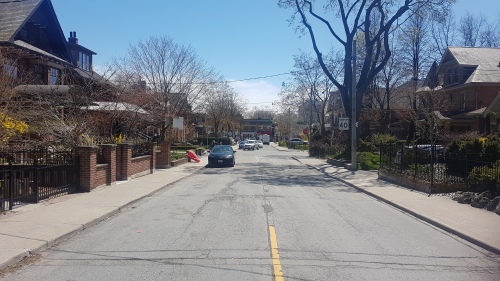 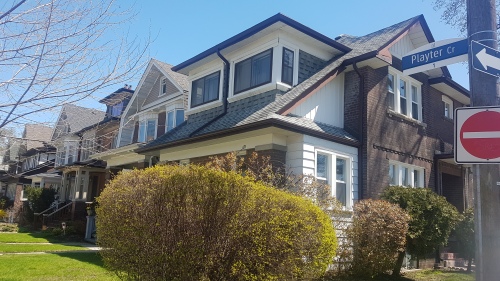 Today, Broadview Avenue and Danforth Avenue is a gate into the eastern part of the city. Once upon a time however, this part of the city just ended. There was no bridge across the Don River. Anyone looking to travel between Riverdale and Toronto had to go south to Gerrard Street or Queen Street.

Despite the Toronto’s annexation of Riverdale south of the Danforth in 1884 and the village of Chester (made up the former Playter lands) north of the Danforth in 1909, the eastern part of the city remained disconnected from the core of the city for some time. Around 1900, Danforth Avenue and the areas north and south of the street were sparsely populated. There were less than twenty structures between Broadview and Jones, most of them houses!

Several developments in the 1910s began to change things. Beginning in 1912, Danforth Avenue was paved and widened to 86 feet. In October of the following year, the Toronto Civic Railway opened the Danforth Civic Streetcar Line to much local support. A Globe article described the scene of 25,000 converging on the street to celebrate — even blocking the cars from passing! 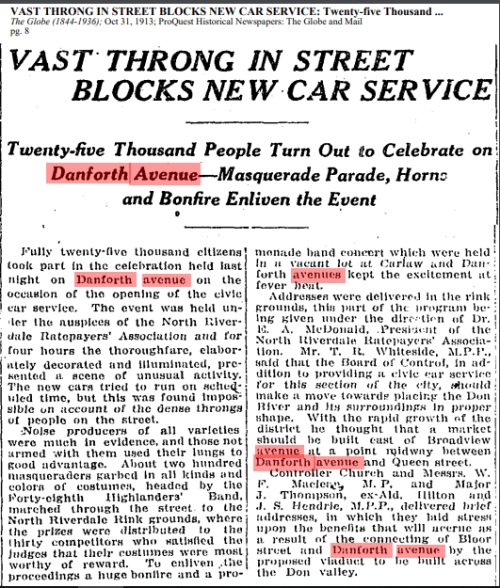 Finally, after many debates of its necessity and four years of construction, the Bloor Street Viaduct opened in 1918. The idea of Public Works Commissioner R.C. Harris and the design of famed Architect Edmund Burke (he has a namesake pub at 107 Danforth Avenue as appreciation), the bridge and transit were in talks since at least 1910. Their proponents saw them as linked and necessary projects. Broadview Avenue already had a streetcar route since 1888, so the corner was set to became a nexus. It is no coincidence that Albert Edward and William Ellerbeck Playter opened the Playter Society in 1908 with grand expectations for the corner in the coming decades. Albert also funded the Playtorium, a building whose incarnations included a vaudeville theatre. Both were two of the earliest on the strip. The Canadian Bank of Commerce branch across the street came around 1918, replacing a blacksmith ship. 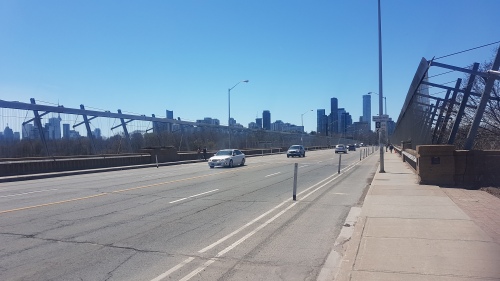 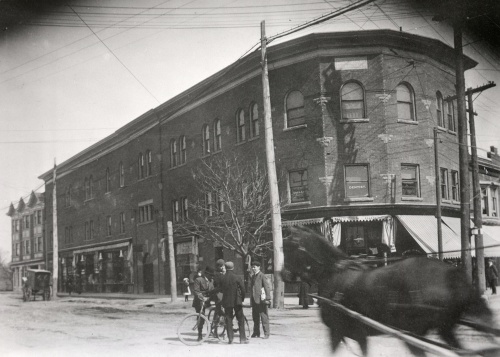 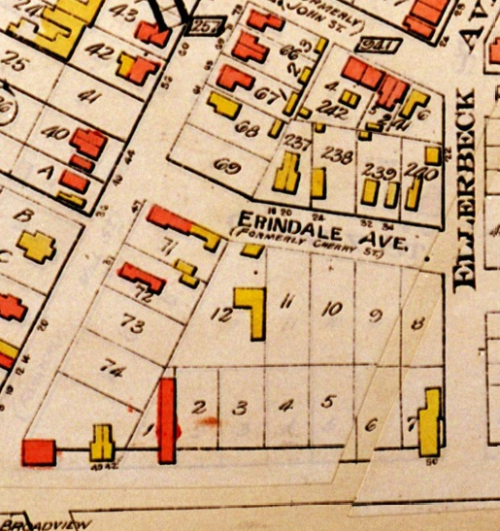 In 1913, the Globe identified the Danforth as new business section in the northeastern part of Toronto. It also described a bizarre episode in which a man discovered a muskrat on Moscow Avenue (today’s Gough Avenue). It perhaps shows The Danforth in transition: growing yet still rural (albeit urban wildlife is not uncommon in 2019). 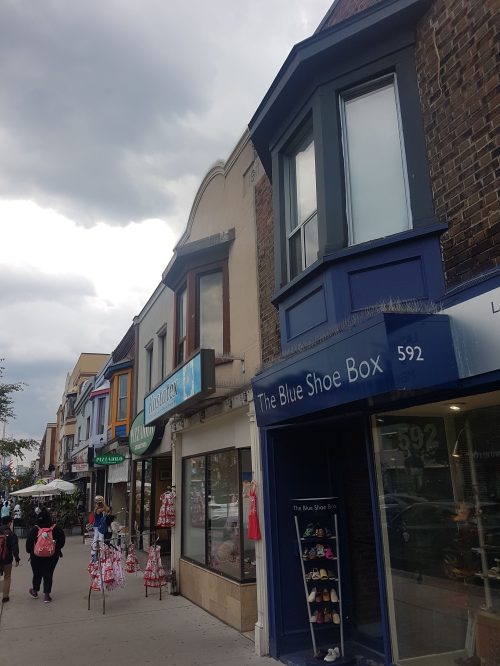 This strip west near 592 Danforth Avenue of Gough Avenue, built 1911, was one of the first row of stores built between Broadview and Pape Avenue.

There was a residential aspect to Danforth Avenue, too. Most of those who now live on the street reside above the shops, but there are at least two remnants of when houses still populated the way at 278 and 280 Danforth Avenue. These were residences built in 1911 for Mr. Alfred W. Pestell and Mrs. Ellen Mackey, respectively. The street addresses were 152 and 154 Danforth Avenue. Residential in nature when they were built, now they host shops. 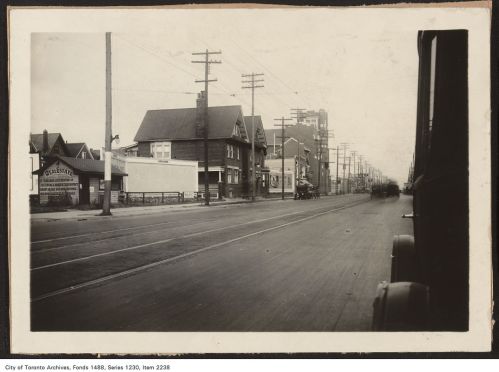 A look at the Danforth today sees houses of worship on either side of the street which also date to this early period in the 1910s. St. Barnabas Anglican Church in 1910 and Danforth Baptist Church in 1914 were two of the first. The Church of the Holy Name followed with construction also in 1914, although it took twelve years to complete.

Another sign the street was coming of age in the decade: Allen’s Danforth, now the Danforth Music Theatre. Built in 1919, it was advertised as “Canada’s First Super-Suburban Photoplay Palace” according to its Heritage Toronto plaque. At least three neighbourhood theatres would open — and close — between Broadview and Pape in the coming decades.

By the 1920s, Danforth Avenue reached its peak. Empty lots from the prior decades filled out. The Danforth Civic Line turned the area into a streetcar suburb, but the era of the automobile was just beginning. In 1922, the Globe, speaking about growing suburbs across Toronto, declared that the lesson was that ‘settlement follows good roads’, citing the upgrades of the prior decade.

Further to the notion that the automobile was now in play, Logan Avenue at one time existed in two sections north and south of Danforth Avenue. City politicians and politicians proposed road improvement schemes after both World Wars, and street widenings, alignments, and extensions were large factors within them. 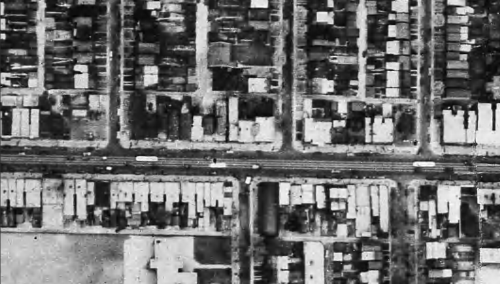 In the mid-1950s, the Danforth-Logan was eliminated, allowing traffic to flow straight through without the need to travel west or east on Danforth. Although the sizeable Withrow Park existed just south on Logan, the event created some much needed public space right on Danforth Avenue which would later serve as important gathering point for the community. 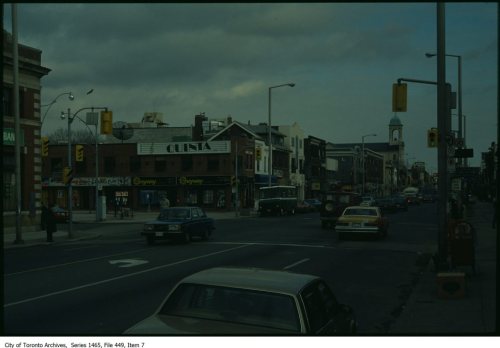 By the 1930s, Danforth Avenue was full of the expected businesses: banks, theatres, dry goods shops, men’s and ladies wear, confectioneries, shoe repair places, drug stores, and more. But the demographics began to change. The 1930 Might’s Greater Toronto Directories show Ethels Delicatessen at 173 Danforth and Lorrain Delicatessen at 457 Danforth. More prominently, we also see Italian fruit stands at 127-129 Danforth Avenue by Vincenzo and Augustino Casuso, at 283 by A Maggio, at 449 Danforth by Salvatore Badalli, at 507 Danforth by Vito Simone, 513 Danforth Avenue by Joseph Badali, at 573 Danforth by Tony Fimio. Finally, there were a number of Chinese themed businesses (with unnamed owners): cafes at 108 and 505 Danforth Avenue, restaurants at 107 and 523 Danforth, and a laundy at 471 Danforth.

By the 1950s, political talk in Toronto shifted toward a subway line under Danforth Avenue. The streetcar was the busiest surface route and, with the populations shifting north from the old city of Toronto, underground rapid transit was nearing a reality. On February 26, 1966, the Bloor-Danforth Subway line opened between Keele Street and Woodbine Avenue, utilizing the lower track of the Bloor Viaduct to faciliate the cross-town transit line. The TTC built a “Y-connection” between the two lines to eliminate the need for transferring.

The green line’s opening meant at least two significant changes to the Danforth. First, as the subway corridor was planned to run north of the street rather than under it, hundreds of houses were expropriated and demolished. The physical result today is a linear set of connected parkettes (and some parking lots) between Chester and Pape Stations. 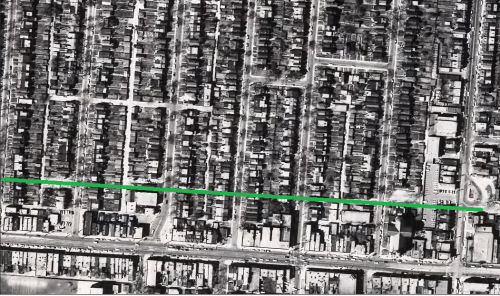 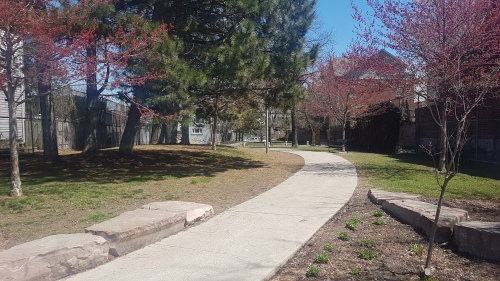 Second, following a similar effect of the Yonge line, the new subway meant the end of streetcar service on the street. Passengers on the Danforth Streetcar and four other routes (Bloor, Coxwell, Harbord, and Parliament) opted for their last rides on the night before the subway’s opening. The Lipton streetcar loop at Pape Avenue and the Erindale loop at Broadview Avenue also closed as transit stations took their spots. 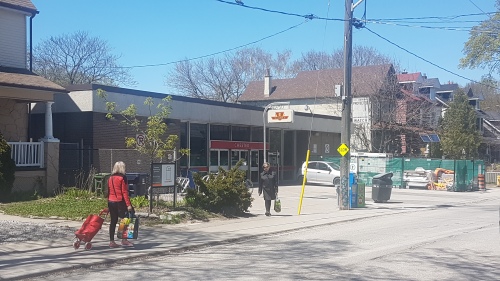 After the Second World War, the Danforth received the identity it is commonly associated with today. The story has been told many times: Greek immigrants left Greece after the military junta of 1967 with a number of them opening up enterprises on Danforth Avenue while settling in the streets north of their shops and further in nearby East York. 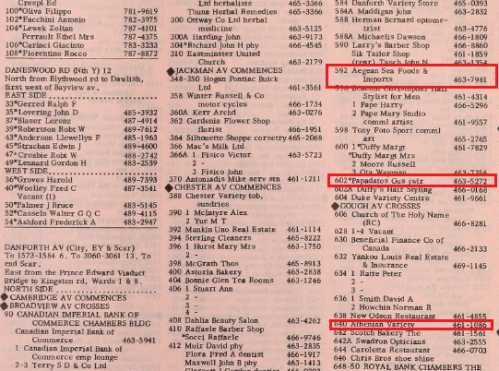 A snapshot of Greek businesses on the north side of Danforth Avenue from the City Directory, 1969. Credit: Toronto Public Library.

Why did they select the Danforth specifically? One theory goes back to the subway. Some shop owners noted how the loss of a surface transit route actually negatively impacted local shopping. The area was not doing as well in the late-1960s as prior decades — a condition for the street to be reinvented. The same would happen in the 1970s when Gerrard Street East became Little India. The rents for closed shops were attractive and affordable for new Greek entrepreneurs.

They also brought their faith with them. In perhaps the most exemplary case of Danforth’s transformation, an old garage built in 1921 when the street was still named Moscow Avenue became St. Irene Chrisovalantou Greek Orthodox Church.

Finally, the Danforth Avenue of today is mostly imagined as a mostly homogeneous collection of Greek affiliated businesses and organizations and the nearly-century old structures they occupy. What is overlooked is how some of these old structures have disappeared over time and new buildings and non-Greek businesses have taking their place.

348 Danforth Avenue, a building with roots in 1924 (and a site that once housed the residence of John Lea Playter), hosts Carrot Common. The 1980s saw new additions that transformed the old structure. Today, a green roof and garden makes the space truly unique. Near Pape, a bank and event space replace an older two story structure at 629 Danforth and an office building usurped the former Palace Theatre at 664 Danforth of the 1920s. 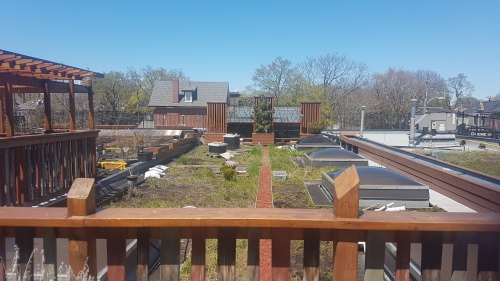 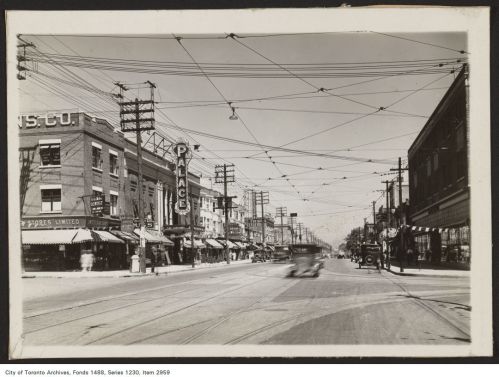 From the 19th century rural environment of the Playter family to the 1920s boom period of muskrats and nabes to the transformative post-war period of subways and souvlaki, Danforth Avenue has shown its fascinating layers of history and geography.