Hearing about a couple of old abandoned structures in the middle of a ravine, I explored the Duncan Mill Ruins while on my walk of the adjacent Betty Sutherland Trail. I entered from an unmarked yet paved path on the east end of the bridge on Duncan Mill Road.

I could’ve followed the path until I reached the front of the first derelict building, but in my infinite wisdom I traveled through a thick field of tall grass and logs (and bugs!). This took me to the back where I then walked around and examined it.

The building had the surrounding plant life growing through it, was defaced with graffiti, and was missing part of its roof. It also consists of two ‘rooms’, the main one having an industrial tank of some sort. I found a suitcase nearby which makes me wonder if someone actually camped (camps?) out there (I suggest and hope not). 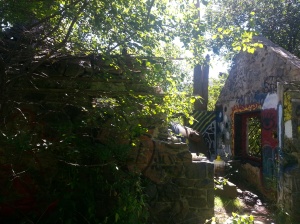 West of this building (I nearly missed it) is another building. This one is smaller and more in tact. It’s certainly got a roof anyways. A look inside produces a space full of debris and garbage.

As for the speculation on the uses of these buildings, they are clearly industrial. Beyond that, I have none. The North York Historical Society looked into them in 2011 and offered some intriguing explanations, but the status of this report is unknown. A blogger from that same year, whose post I consulted while looking for info on the Betty Sutherland Trail (and indeed first informed me of the Duncan Mill Ruins), did a bit of digging on some of the machinery in the large structure.

I would be very intrigued to know if the NYHS does any more work, but for now, this was an intriguing find.

Posted in Landmarks, Parks and Trails