On Sunday August 16, 2015, Open Streets TO ran the first of its car-free street initiatives this year which aim to promote healthy-living and vibrant cities and reimagine public space.

Beyond supporting the awesome event and its cause, I wanted to take advantage of the time and open streets to stroke my historical and urban curiosities, particularly in regards to Yonge Street and the T. Eaton Co.

I’ve embarked on a project to map the history of Eaton’s transformative influence on Toronto. Much of it relates to the Yonge Street we see today. Check it out here.

The streets were open on Bloor from Spadina to Parliament and Yonge from Bloor to Queen, but I elect to walk southwards from College. The intersection’s landmark is, of course, College Park, opened as the ambitious Eaton’s College Street in 1930.

It was to be the T. Eaton Co.’s headquarters, moving from its flagship store about a 1km to the south. It was also supposed to have a 36-storey tower, but the penny-pinching of the Great Depression scaled it back. Luckily its ornate Art Deco-ness as it exists today hasn’t changed since the 30s.

Yonge Street won’t get any emptier than this at noon. 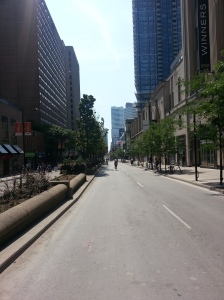 The College department store was built with many entrances, one of which leads up to the Carlu. The store closed in February 1977 along with seventh floor restaurant and event space, The Round Room and Eaton Auditorium (which opened in 1931). It was locked until 2003, when it was rebranded as the Carlu, after the space’s architect, John Carlu. In 1983, the Round Room and Eaton Auditorium were designated a National Historic Site to prevent demolition. 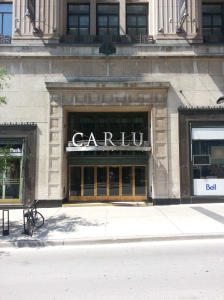 I had to take a peek inside. 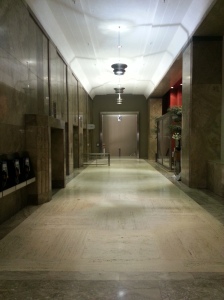 Passing the store completely, I can’t resist a look back, if only to compare with an dingy looking shot from the 1970s. 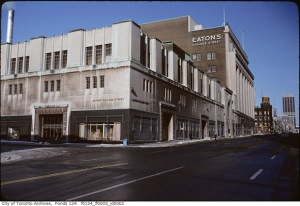 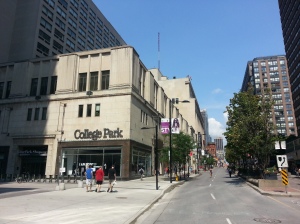 The Downtown Yonge Street strip is next with RyersonU’s towers looming above it all.

Beyond that, the Eaton Centre, another ambitious Eaton endeavour, is continuing on its perennial makeover of its oldest part from 1977. Nordstrom’s is set to become its third anchoring tenant after the recently closed Sears and the namesake store before it.

There are many making use of the free street – walkers, runners, cyclists, skateboarders, rollerbladers – but it’s a wonder seemingly a bigger majority still are using the sidewalk. It’s intuitive behaviour in any normal circumstance, but so counter-intuitive to the whole purpose of Open Streets.

The Toronto Eaton Centre also redefined the street grid around Yonge. Where Baton Rouge is now, one would’ve been able to turn on Albert Street.

Beside the 1905 E.J. Lennox designed Bank of Toronto building is the Massey Tower pit. Fun fact: Heritage Toronto’s former logo is based on the bank. I didn’t know that.

I wonder if the people manning the table in front of Danier know they’re in front of the site of Timothy Eaton’s  first store at 190-196 Yonge Street, opened in 1883.

The walk ends at Queen Street with a gaze at the 1896 Robert Simpson Co. building, which housed Eaton’s historic competitor. The irony is the Chicago-style structure occupies the site of T. Eaton’s first dry goods store he opened in 1869.

Finally, turning back up to face Yonge, I ponder another historical bookend. I wonder what our 19th century brethren in the pre-automobile age might have thought about Open Streets. 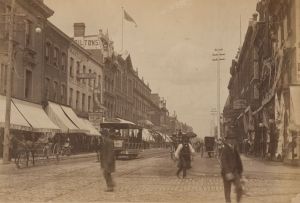